NEWS RELEASE: ISSUED ON BEHALF OF THE BLACK SHEEP BREWERY A popular North Yorkshire pub has been given a helping hand by the Black Sheep Brewery, as it plays host to the Helmsley’s first-ever beer festival. The Feathers, which is located on the town’s market square, will host the festival on Saturday, 15 March, after locals suggested the idea, with all proceeds going to Help for Heroes. Black Sheep Brewery has sponsored the festival and will supply all nine of its cask ales, marking the first time that all of its casks are available at one venue, including Golden Sheep, Riggwelter, Bighorn and Russian Stout, with The Feathers already having Black Sheep Best Bitter and Ale on tap. The festival will start at 5pm and take place at The Feathers’ function room, with an Elvis tribute act providing the night’s entertainment. Tickets are priced at £15, which includes a variety of classic pub food. Steven Macartney, of The Feathers, said: “The inaugural Helmsley beer festival was a fantastic idea by our loyal customers, and I would like to thank Black Sheep Brewery for their support and sponsorship of the event. “This is the first time that something like this has come to Helmsley, and it could turn into a regular fixture as we have received a lot of interest about it. The beer festival is open to everyone and should prove to be an enjoyable event for all in attendance, with all proceeds going to an excellent cause.” Jo Theakston, sales and marketing director at Black Sheep Brewery, said: “We are delighted to be supporting such a great initiative in this way as all the money raised will be going to such a great cause. It is a landmark for Black Sheep that all of our cask ales will be available at one venue, and we are delighted that our beers are received so well by customers of The Feathers. “I would like to wish the pub all the best with the event and any further festivals.” For more information about the beer festival, or to book tickets, please contact 01439 770 275. www.blacksheepbrewery.com ENDS CONTACT: Paul White on 01325 363436 Notes to Editors: The Black Sheep Brewery in Masham made its first beer in 1992 after being built up by Paul Theakston, whose family had brewed in the area for six generations. In a world of ever increasing bland, mass-produced beer Paul saw an opportunity to return to what his family had done best since 1827, making real beer in the time-honoured fashion. An old maltings building, once part of Lightfoot's Brewery became the Brewery’s home. This landmark building, which stands high over the banks of the Ure, had fallen in to disrepair as years of neglect as a semi-redundant grainstore had taken its toll. Paul assembled a small team around him to fight the rats and build a traditional country brewery. The Black Sheep Brewery name derived from Masham’s association with sheep, but ‘Sheep Brewery’ didn’t quite sound right, so with a little creativity from Paul’s wife the Black Sheep Brewery was born, a name that sat well with the area, spoke volumes about the maverick attitude to the multi-nationals seeking to dominate the brewing industry and captured the essence of the family struggle that led to our birth. Black Sheep Ale at 4.4% ABV, now in an eco-friendly lightweight bottle, continues to maintain its presence among the top ten premium bottled ale brands, and is available nationwide from virtually all the major supermarket retailers. It is a classic premium bitter and as with all Black Sheep beers, full of character derived from the best possible brewing materials, plenty of time and patience in the brewing and our very special Yorkshire Square fermenters. 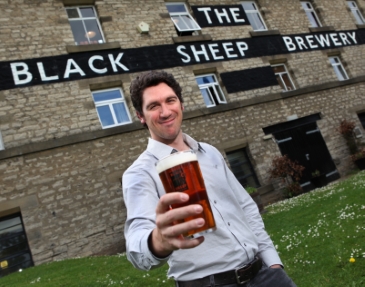