Black Sheep Brewery is spreading plenty of Christmas cheer as its 25th anniversary year draws to a close, with the launch of a new limited edition beer in honour of its first quarter century of brewing success.

Legacy 25, an 8.5% ABV classic bottled Yorkshire brew, is available exclusively from Black Sheep’s Sheepy Shop in Masham and online at blacksheep.co.uk in the run up to Christmas.

It is the only 750ml bottle in Black Sheep bottled range, which makes it ideal for sharing over the Christmas period and only as limited number have been produced.

In keeping with the brewery’s tradition of breaking with convention, Legacy 25’s branding has been printed directly onto the bottle rather than onto a label, which will make it a unique collector’s item for Black Sheep fans.

It follows in the footsteps of a previous 750ml bottled limited edition brew, Progress, which was created for Black Sheep’s 20th anniversary.

Full of Yorkshire character, Legacy 25 has been brewed to offer a warm fruity nose, perfect for the December festivities, blended with Pale and Crystal malts combined with Goldings hops, which produce a beer full of depth, flavour and bite.

The launch of Legacy 25 is part of Black Sheep’s silver anniversary celebrations, which have included the creation of 54 Degrees North, the brewery’s first lager, in July. In addition, this year it has landed several industry awards, most notably being named Beer Champion 2017 by the British Beer & Pub Association (BBPA), the highest accolade the Masham-based brewery has received.

Jo Theakston, Sales and Marketing Director at Black Sheep Brewery, said: “We wanted to create one final surprise for our customers in our silver anniversary year and what better time than Christmas to introduce Legacy 25.

“Our previous limited edition brews have always been popular so I expect this one to fly of the shelves of the Sheepy Shop very quickly!

“It’s a beer with powerful endeavour and true Yorkshire character, which reflects the journey we have taken since the brewery was founded using our collective creative skills and influences to create a fitting tribute to what we’ve achieved in the last 25 years.”

In the past 12 months Black Sheep has become a multi-award winning brewery where it has secured the following accolades: 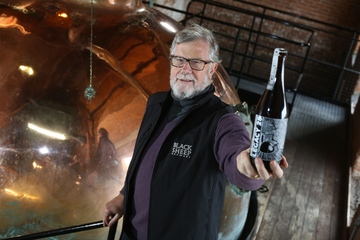