Black Sheep Brewery is to reopen its Visitor Centre and restaurant in Masham from Saturday 4th July following the recent government announcement on the relaxation of lockdown restrictions.

The recently renovated ‘Black Sheep Tap & Kitchen’ in Chapel Allerton will also reopen on the same day, with both venues having several safety measures in place, including regular cleaning of shared facilities, table service with strict social distancing, and also encouraging contactless payments as much as possible.

Although Brewery tours will not be available in the short term, the multi-award-winning Visitor Centre and restaurant will be open Wednesday to Saturday between 12pm and 8pm, and Sunday between 12pm and 4pm. They will be serving a new range of homemade food, which includes stone baked pizzas following the installation of two pizza ovens during lockdown.

The Black Sheep Tap & Kitchen will be open Wednesday and Thursday from 5pm until 10pm, Friday and Saturday from 12pm until 11pm, and Sunday from 12pm until 6pm. The venue will also be offering an appetising food service at set times throughout the day.

Customers at both venues will be able to order via a new online app, which the brewery is rolling out to limit close contact with customers. The Visitor Centre will also offer a takeaway service, with disposable cutlery so customers can enjoy a meal in its picturesque beer garden. The effectiveness of these measures will be assessed prior to opening Black Sheep’s three other pubs in Leeds and York.

The Brewery Shop, within the Visitor Centre, which reopened earlier in June for takeout beer options, will continue to sell packaged beers and brewery merchandise while also adhering to social distancing measures. The brewery will continue to offer its ‘DeliverEWE’ service from the Visitor Centre, which was established early in lockdown to deliver food and beer to the houses of the local community.

Charlene Lyons, Chief Executive of Black Sheep Brewery, said: “We have been gearing up for reopening for some time and we can’t wait to serve our first pints at the Visitor Centre and The Tap & Kitchen.

“We have put all required social distancing and hygiene measures in place in each venue so our customers can be confident that they are in a safe environment when they come back to enjoy their favourite Black Sheep food and drink.

“We hope to open our other pubs soon and we will use the Visitor Centre and Tap & Kitchen to benchmark our new ways of working before we apply them to our smaller venues, to ensure the safety of our team and our customers.” 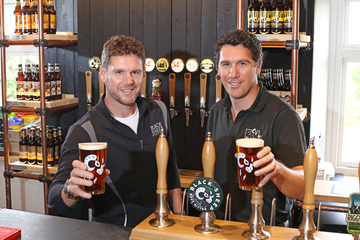