Black Sheep Brewery is set to create a scrum at pubs and bars with the launch of its first seasonal ale of its 25th anniversary year that will toast an exciting season of international rugby.

Ram Tackle, a 4.1% ABV ruby ale with its ‘pack’ of eight different English hops, will be available in pubs throughout February, to coincide with the launch of the Six Nations.

In addition to the Six Nations tournament, which takes place throughout February and March, Ram Tackle has been brewed to celebrate the British & Irish Lions summer tour of New Zealand.

Ram Tackle’s launch follows the North Yorkshire-based brewery’s previous rugby-inspired brews, including Blind Side and Ruckin’ Disaster, which were launched ahead of the 2015 Rugby World Cup and England’s subsequent dismal campaign.

Jo Theakston, Sales and Marketing Director at Black Sheep Brewery, said: “2017 is shaping up to be an exciting year for Black Sheep Brewery as we gear up for our 25th anniversary celebrations, and rugby in the UK with the Six Nations and Lions tour to look forward to, so it was only fitting that we created another rugby-inspired brew.

“Customers will be scrumming down at the bar throughout the Six Nations, and it is great to be a part of the celebrations by offering Ram Tackle as one of the world’s most prestigious sporting tournaments kicks off. We are expecting a winning performance from Ram Tackle.”

Jo added: “The England national team has developed into a dominant force in international rugby, following the disastrous World Cup on home soil, so hopefully the boys can continue their impressive run and give us all something to cheer about this spring!” 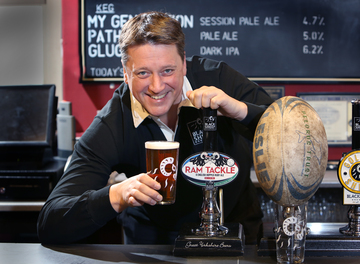