As one of the world’s largest sporting events prepares to pass by its door, the Black Sheep Brewery has launched a special celebratory beer which is expected to be its biggest seasonal ale ever. Velo – which is the French word for bicycle – has been launched to celebrate Le Grand Depart Yorkshire, and the sport of cycling, with which Black Sheep has a proud history of engagement. Having started only a few miles up the road in Harrogate, some of the world’s leading cyclists on the Tour de France’s Grand Depart will pass directly through the shadow of the brewery as it plays host to Le Grand Party, the biggest event in Masham’s history, on July 5th. Sales of Velo, a 4.2% ABV ‘freewheeling’ fresh pale ale brewed with cascade hops and a subtle hint of orange and coriander, will also raise funds in support of Mike Hughes, Yorkshire’s very own Marie Curie Power Peloton rider, who was on hand to help launch the new beer. The Power Peloton will see amateur cyclists ride the stage one route on the day of the race itself, raising valuable funds for charity. Additionally, a collector card scheme has been developed to support pubs, giving drinkers a chance to win prizes including special Velo and biking merchandise. Ripon bike shop Moonglu has donated a Giant Defy bike as one of the prizes. Velo was developed and tested in Black Sheep’s microbrewery, then scaled up in the brewery’s full plant. Around 20,000 people are expected to descend upon the town of Masham as Black Sheep Brewery joins with other local businesses to put on a special celebration. This will include partnering with the neighbouring Theakston’s brewery on a number of joint cask ale bars, for the first time since Black Sheep founder Paul Theakston left the family firm. Jo Theakston, Black Sheep Brewery’s Sales and Marketing Director, said: “These are exciting times in Yorkshire. We are having the biggest party Masham has ever seen and the yellow pump clip of Velo will be prominent throughout that celebration and across pubs throughout the summer. “The phenomenal interest from the pub trade so far gives us huge confidence that this will be the most successful seasonal ale ever from Black Sheep.” Mike Hughes said: “The support from Black Sheep through sales of Velo is a huge boost for my fundraising efforts for Marie Curie. It is exciting enough to be riding the stage one route with people lining the streets for such a major event, but to be working with Black Sheep Brewery and Velo to raise money for such a great cause makes it all the more special.” Mike can be sponsored at www.justgiving.com/mjdhughes www.blacksheepbrewery.com ENDS NEWS RELEASE: ISSUED ON BEHALF OF THE BLACK SHEEP BREWERY CONTACT: Paul White on 01325 363436 Notes to Editors: The Black Sheep Brewery in Masham made its first beer in 1992 after being built up by Paul Theakston, whose family had brewed in the area for six generations. In a world of ever increasing bland, mass-produced beer Paul saw an opportunity to return to what his family had done best since 1827, making real beer in the time-honoured fashion. An old maltings building, once part of Lightfoot's Brewery became the Brewery’s home. This landmark building, which stands high over the banks of the Ure, had fallen in to disrepair as years of neglect as a semi-redundant grainstore had taken its toll. Paul assembled a small team around him to fight the rats and build a traditional country brewery. The Black Sheep Brewery name derived from Masham’s association with sheep, but ‘Sheep Brewery’ didn’t quite sound right, so with a little creativity from Paul’s wife the Black Sheep Brewery was born, a name that sat well with the area, spoke volumes about the maverick attitude to the multi-nationals seeking to dominate the brewing industry and captured the essence of the family struggle that led to our birth. Black Sheep Ale at 4.4% ABV, now in an eco-friendly lightweight bottle, continues to maintain its presence among the top ten premium bottled ale brands, and is available nationwide from virtually all the major supermarket retailers. It is a classic premium bitter and as with all Black Sheep beers, full of character derived from the best possible brewing materials, plenty of time and patience in the brewing and our very special Yorkshire Square fermenters. 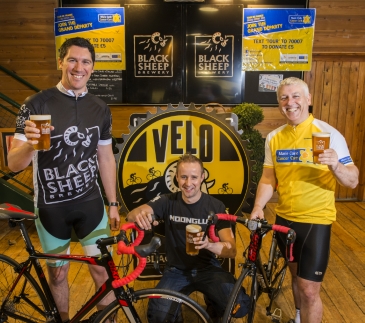