Black Sheep use pedal power to raise funds for charity

NEWS RELEASE: ISSUED ON BEHALF OF THE BLACK SHEEP BREWERY The Black Sheep Brewery has raised over £17,000 for charity after 90 cyclists took part in the second Black Sheep Firkin Challenge. The two challenges organised by the Brewery gave cyclists the opportunity to take part in either the so-called ‘Easy Rider’ which stretched to 60 miles or the 100 mile ‘Not so Easy Rider’, for those wanting even more of a challenge, including cycling past Tan Hill, the highest pub in England. After a day of riding through the beautiful scenery of the Yorkshire Dales, the cyclists ended up at the Brewery, based in Masham, for a well earned pint of BlackSheep. All the money raised from the challenge is being donated to Wooden Spoon, the children’s charity of rugby. The charity aims to improve the quality and prospect of life for children and young people who are disadvantaged physically, mentally or socially in the UK and Ireland, giving them a chance to achieve their full potential in life. Black Sheep Managing Director, Rob Theakston and his brother, Jo Theakston, Director of Marketing and Off Trade Sales, took part alongside members of staff from the brewery and Visitor Centre, as well as experienced and novice cyclists to complete the challenge. Jo Theakston said: “We have received fantastic support from people who have sponsored us for this challenge. The amount raised is pretty phenomenal. We had a fantastic day and it was great to see those involved enjoy a cool pint of Black Sheep when they had finished. “The Wooden Spoon Charity does fantastic work to improve the lives of children and young people who face a variety of tough challenges on a daily basis.” Ashleigh Robson, Marketing Executive of Black Sheep Brewery and organiser of the Firkin Challenge, said: “I am absolutely thrilled that we have managed to raise so much money. Everyone had a great day and riders really pushed themselves to finish the course they had selected. I would like to extend a massive well-done to all those involved in this year’s Firkin Challenge.” ENDS CONTACT: Melanie Smith on 01325 363436 Notes to Editors: Please note the Black Sheep Brewery has a new logo, if high res version is needed please download from: http://www.recognitionpr.co.uk/journalistarea-story.asp?id=11216 The Black Sheep Brewery in Masham made its first beer in 1992 after being built up by Paul Theakston, whose family had brewed in the area for six generations. In a world of ever increasing bland, mass-produced beer Paul saw an opportunity to return to what his family had done best since 1827, making real beer in the time-honoured fashion. An old maltings building, once part of Lightfoot's Brewery became the Brewery’s home. This landmark building, which stands high over the banks of the Ure, had fallen in to disrepair as years of neglect as a semi-redundant grainstore had taken its toll. Paul assembled a small team around him to fight the rats and build a traditional country brewery. The Black Sheep Brewery name derived from Masham’s association with sheep, but ‘Sheep Brewery’ didn’t quite sound right, so with a little creativity from Paul’s wife the Black Sheep Brewery was born, a name that sat well with the area, spoke volumes about the maverick attitude to the multi-nationals seeking to dominate the brewing industry and captured the essence of the family struggle that led to our birth. Black Sheep Ale at 4.4% ABV, now in an eco-friendly lightweight bottle, continues to maintain its presence among the top ten premium bottled ale brands, and is available nationwide from virtually all the major supermarket retailers. It is a classic premium bitter and as with all Black Sheep beers, full of character derived from the best possible brewing materials, plenty of time and patience in the brewing and our very special Yorkshire Square fermenters. Twitter: Facebook: Share 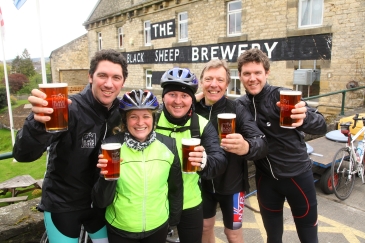