Black Sheep welcome a goat to its flock

NEWS RELEASE: ISSUED ON BEHALF OF THE BLACK SHEEP BREWERY The Black Sheep Brewery is offering its direct delivered on-trade customers an exciting award-winning beer from the Czech Republic, which sits perfectly alongside its own iconic brand. Kozel, which translated into English means goat, is a 4% lager and is brewed in the Czech village of Velke Popovice. The World Beer is available to Black Sheep's direct delivered on-trade customers from the Brewery and makes a quality addition to the Black Sheep brewery’s factored goods range. Kozel offers Black Sheep customers a fantastic opportunity to trade their consumers up to a premium 4% lager helping the customers to maximise their profits. Kozel is brewed using a traditional Czech beer process which delivers an authentic flavoursome taste. Steeped in history, the premium Czech lager has been brewed for over 130 years and has a protected recipe that is proudly guarded by its master brewers. Brian Smith, On Trade Sales Director at the Brewery said: “We are very pleased to be able to offer this quality addition to our factored goods range. Kozel offers an opportunity for landlords to enhance their 4% beer range with an authentic Czech beer, which is brewed in a traditional manner. Plus we like the idea of having a goat amongst the ‘flock!' “Kozel is a fantastic addition to our on-trade range. It highlights that Black Sheep is dedicated to bringing quality, new and different beers from around the world to compliment our own award winning quality Ales to be made available to our loyal direct On Trade customers.” Sven Stewart, Account Manager for Kozel, said: “We are extremely pleased that the Black Sheep brewery is stocking our beer. It’s great that the brewery has embraced Kozel and we have developed a solid partnership. Through Black Sheep brewery’s network, our beers will be available to stock nationwide and it’s great to be associated with such a quality UK brand.” ENDS CONTACT: Melanie Smith on 01325 363436 Notes to Editors: Please note the Black Sheep Brewery has a new logo, if high res version is needed please download from: http://www.recognitionpr.co.uk/journalistarea-story.asp?id=11216 The Black Sheep Brewery in Masham made its first beer in 1992 after being built up by Paul Theakston, whose family had brewed in the area for six generations. In a world of ever increasing bland, mass-produced beer Paul saw an opportunity to return to what his family had done best since 1827, making real beer in the time-honoured fashion. An old maltings building, once part of Lightfoot's Brewery became the Brewery’s home. This landmark building, which stands high over the banks of the Ure, had fallen in to disrepair as years of neglect as a semi-redundant grainstore had taken its toll. Paul assembled a small team around him to fight the rats and build a traditional country brewery. The Black Sheep Brewery name derived from Masham’s association with sheep, but ‘Sheep Brewery’ didn’t quite sound right, so with a little creativity from Paul’s wife the Black Sheep Brewery was born, a name that sat well with the area, spoke volumes about the maverick attitude to the multi-nationals seeking to dominate the brewing industry and captured the essence of the family struggle that led to our birth. Black Sheep Ale at 4.4% ABV, now in an eco-friendly lightweight bottle, continues to maintain its presence among the top ten premium bottled ale brands, and is available nationwide from virtually all the major supermarket retailers. It is a classic premium bitter and as with all Black Sheep beers, full of character derived from the best possible brewing materials, plenty of time and patience in the brewing and our very special Yorkshire Square fermenters. Twitter: Facebook: Share 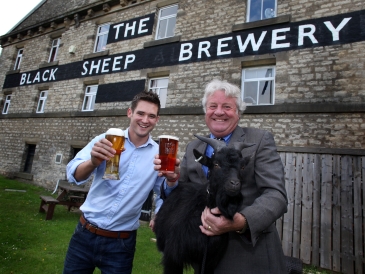