Black Sheep Brewery’s award-winning Visitor Centre is to continue spreading joy this Christmas, as it releases its festive opening hours.

The Visitor Centre, which is in Masham, North Yorkshire, at the site of the brewery, will be open throughout the festive period, with the exception of Christmas Day and Boxing Day.

Festive lunch at the Black Sheep Brewery is available until New Year’s Day from 12pm-3pm, Monday-Saturday.

Black Sheep’s Visitor Centre, which comprises of its split-level Bistro and Baa…r, and Sheepy Shop, received a TripAdvisor Certificate of Excellence, in the summer, as a result of consistently positive reviews on the website.

Visitors will also be able to take a tour of the brewery, which will run daily throughout the festive period at 11am, 12.30pm, 2pm and 3.30pm, with the last tours on Christmas Eve and New Year’s Eve taking place at 2pm.

Jo Theakston, Sales and Marketing Director at Black Sheep Brewery, said: “The Black Sheep Brewery will well and truly be rocking around a Christmas tree over the festive period, as we are maintaining our opening times to suit all – whether it is to take a tour, grab a bite to eat or visit the Sheepy Shop for gift ideas or to treat yourself.

“Blitzen, our popular Christmas beer, will be available at our bar on cask, along with our ‘very naughty’ Monty Python-inspired brew, Brian, and limited edition Imperial Russian Stout to get everyone in the Christmas spirit. Our professional chef will also be on hand to cook up his usual favourites, as well as festive-themed meals.

“I would like to wish a Merry Christmas and a Happy New Year to all our customers, suppliers and friends!” 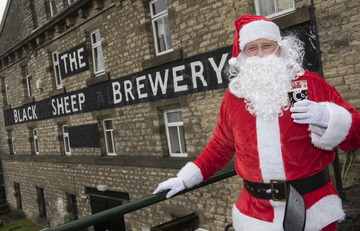