Black Sheep Brewery has announced the return of a beer named in honour of its iconic founder to pubs this July, in celebration of its 25th anniversary year.

Pathmaker was created in recognition to Paul Theakston’s reputation as an early pioneer against bland beer and mass corporations when he founded the Masham-based brewery in 1992.

At 4% ABV, Pathmaker is a pale ale brewed with Chinook Hops that offers an adventurous fresh aroma, juicy hop and malty mouth feel with a bitter finish.

It was originally launched as a bottled beer in 2015, but has since been scaled up to 330ml can and keg formats, and is Black Sheep’s latest seasonal cask ale available through July.

To mark the brewery’s silver anniversary, Paul was also immortalised in the form of a limited edition tap handle figurine, in March.

Jo Theakston, Sales and Marketing Director at Black Sheep Brewery, said: “In our anniversary year it is important to recognise our rich history and roots, and Pathmaker embodies the Black Sheep story perfectly. Pathmaker is a fitting tribute to Dad’s work and how he stayed true to his beliefs and went against the norm to create great Yorkshire beers.

“It would be rude not to offer pub customers Pathmaker in cask as part of this special year. We are expecting more good things from Pathmaker, and Dad’s face will be a welcome sight at the bar up and down the country, as we gear up for more 25th anniversary celebrations!” 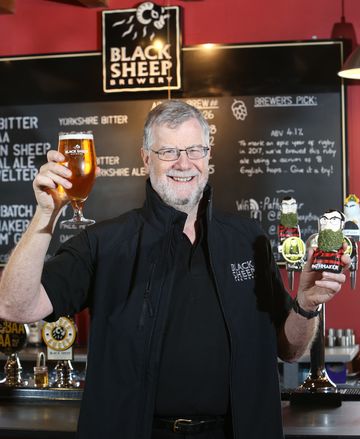