NEWS RELEASE: ISSUED ON BEHALF OF THE BLACK SHEEP BREWERY The Black Sheep Brewery has been celebrating the success of this year’s Boots and Beer festival which has raised £1,000 for Swaledale Mountain Rescue Team. This year was the 10th anniversary of the weekend, organised by the Black Sheep Brewery, which attracted 400 walkers to the Yorkshire Dales for breathtaking scenic walks, combined with the Brewery’s award winning ales. The weekend saw ramblers start from Hawes, Askrigg or Aysgarth with a choice of 15 walks ranging from easy to challenging, which were specially written by Mark Reid, author of 'The Inn Way' guidebooks. One of the highlights took place on Saturday night when walkers were treated to a special evening with mountaineering expert, Alan Hinkes OBE. Alan is the first Briton to climb all 14 of the world's highest mountains, each over 8000m high where human survival rate is measured in hours! Only 12 other people have achieved this feat, which is the same as the number of people who have stood on the moon. Alan spoke about his experiences, including surviving an avalanche and his many expeditions, including Mount Everest in April this year. He described how, on one of his attempts to the top of Everest he was about 100 yards from the peak when severely bad weather conditions set in. Rather than chancing the weather and his life, Alan decided to abandon the trip, taking the relaxed view that he would simply, try again. Jo Theakston, Director of Marketing and Off Trade Sales at Black Sheep Brewery said: “Everyone who attended this year’s festival had a fantastic time, despite the rather blustery conditions. Listening to Alan Hinkes was a real highlight of the weekend. His stories about climbing these magnificent mountains were not only fascinating but also inspiring. “We managed to raise a fantastic amount for the Swaledale Mountain Rescue Team who do such an important job in helping walkers when they get into difficulties. We hope to mirror the success of this year’s Boots and Beer festival for many years to come.” ENDS CONTACT: Melanie Smith on 01325 363436 Notes to Editors: The Black Sheep Brewery in Masham made its first beer in 1992 after being built up by Paul Theakston, whose family had brewed in the area for six generations. In a world of ever increasing bland, mass-produced beer Paul saw an opportunity to return to what his family had done best since 1827, making real beer in the time-honoured fashion. An old maltings building, once part of Lightfoot's Brewery became the Brewery’s home. This landmark building, which stands high over the banks of the Ure, had fallen in to disrepair as years of neglect as a semi-redundant grainstore had 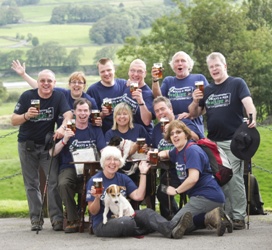