NEWS RELEASE: ISSUED ON BEHALF OF THE BLACK SHEEP BREWERY The Black Sheep Brewery in Masham is gearing up for a tough challenge to raise money for the Wooden Spoon children’s charity. Four employees from the brewery are preparing to tackle the 82-mile ‘Another Firkin Challenge’ bike ride which will start from Ulverston in Cumbria and finish at Black Sheep Brewery. Jo Theakston, Allan Russell, Ali Little and Rob Theakston will be cycling the route on Saturday May 21. If this wasn’t enough of a challenge, they will also be towing a beer barrel behind them. Teams of cyclists and a support vehicle driver were encouraged to enter the event, which aims to present a challenge but also provide the chance to raise money for the worthy children’s charity. The picturesque but challenging cycle route starts in Ulverston, from the Old Hartley’s Brewery, where most of the Black Sheep’s original brewing equipment came from. The teams will then travel through the heart of the South Lakes, Dentdale and Wensleydale, finishing in Masham at the Black Sheep Brewery for well deserved refreshments. Friends and family of the cycle teams will also be invited to a bbq and prize giving ceremony at the brewery when they arrive at the finish line on Saturday afternoon. The Wooden Spoon children’s charity aims to improve the quality and prospect of life for children and young people who are disadvantaged physically, mentally or socially in the UK and Ireland giving them a chance to achieve their full potential in life. Ashleigh Robson, Marketing Executive, who organised the event from Black Sheep Brewery said, “This is the first year we have organised the 82-mile cycling event. We intend to challenge the cyclists, but also hope that they enjoy the route. “The Wooden Spoon is a fantastic charity, which can really help to change young people’s lives. “ Jo Theakston, Director of Marketing and Off Trade Sales said, “I am looking forward to the cycle. I have cycled as far as this in one day before, but not towing a beer barrel! My colleagues will spur me on and knowing there is a decent pint of beer at the finish line is a big incentive. “We want to raise as much money as possible for this very worthwhile cause. The team have already raised over £1,000 for the charity, which will go towards helping children and young people throughout the UK and Ireland.” For more information on the event please call Ashleigh on 01765 689227 or for full details, please visit: www.blacksheepbrewery.co.uk ENDS CONTACT: Melanie Smith on 01325 363436 Notes to Editors: The Black Sheep Brewery in Masham brewed its first beer in 1992 after being set up by Paul Theakston, whose family had brewed in the town for six generations. In a world of ever increasing bland, mass-produced beer Paul saw an opportunity to return to what his family had done best since 1827, making real beer in the time-honoured fashion. An old maltings building, once part of Lightfoot's Brewery became the Brewery’s home. This landmark building, which stands high over the banks of the Ure, had fallen in to disrepair as years of neglect as a semi-redundant grainstore had taken its toll. Paul assembled a small team around him to fight the rats and build a traditional country brewery. The Black Sheep Brewery name derived from Masham’s association with sheep, but ‘Sheep Brewery’ didn’t quite sound right, so with a little creativity from Paul’s wife the Black Sheep Brewery was born, a name that sat well with the area, spoke volumes about the maverick attitude to the multi-nationals seeking to dominate the brewing industry and captured the essence of the family struggle that led to our birth. Black Sheep Ale at 4.4% ABV, now in an eco-friendly lightweight bottle, continues to maintain its presence among the top ten premium bottled ale brands, and is available nationwide from virtually all the major supermarket retailers. It is a classic premium bitter and as with all Black Sheep beers, full of character derived from the best possible brewing materials, plenty of time and patience in the brewing and our very special Yorkshire Square fermenters. Twitter: Facebook: Share 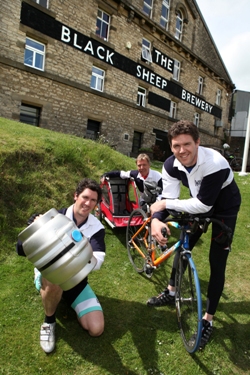