NEWS RELEASE: ISSUED ON BEHALF OF THE BLACK SHEEP BREWERY BREWERY HAILS SHOW AS GREAT FOR BUSINESS 07/07/2011 The Black Sheep Brewery, based in Masham, is championing the Great Yorkshire Show as a fantastic showcasing event for businesses and will be revealing its brand new logo at the event. The iconic Black Sheep Brewery logo has been given a fresh new-look after nearly 20 years since its first ale was brewed and will be exclusively unveiled at the show. By developing the logo the brewery hopes to build the business which has already recorded excellent sales figures from the start of the financial year in April. Since appearing at the Great Yorkshire Show last year the Black Sheep Brewery has increased its sales of Black Sheep Ale in bottle by a healthy 13%, and cask beer sales are showing good like for like growth on last year, driven by lead brand Best Bitter and new beer Golden Sheep. Sales have been bolstered by the success of recent limited edition Russian Imperial Stout - a new departure for Black Sheep into the specialist Ale category, and one they hope to repeat in the future. This year the Black Sheep Brewery is once again the main provider of beverages for one of the largest agricultural shows in the country. Visitors to the Black Sheep Baa...r, run by Cask Marque registered mobile events company, Premier Event Bars, will be able to quench their thirst with the full range of Black Sheep ales including, Black Sheep Best Bitter, Golden Sheep and Riggwelter. Each year the show, which is held over three days, attracts in excess of 125,000 visitors. Black Sheep Brewery believes that being represented at such a prestigious agricultural event allows the business to reach a mass market which is further increased by physically bringing the product to the consumer. Jo Theakston, Director of Marketing, said: “We are very proud to be unveiling our new logo at the show and believe it is the perfect platform to show our loyal customers how we are developing. We have been exhibiting at the Great Yorkshire Show right from the early days of Black Sheep and it has been exciting to watch our part in the Show grow just as the Show itself has now grown into the premier agricultural event in the country. “We are very proud to be based in the heart of North Yorkshire and love attending the Great Yorkshire Show which is synonymous with this. We keep our brewing techniques to a traditional style to produce the most authentic and flavoursome ales. Our sales figures for the first quarter have been really encouraging and we hope to continue this through our new logo launch and a successful week at the Great Yorkshire Show." “We are taking our biggest mobile bar to this year’s show and will also have a scaled down version of our shop, where visitors can buy our bottled beers, unique branded t-shirts and fantastic hampers, packed full of locally produced goodies. There may even be a strong limited edition Yorkshire brewed Russian Imperial Stout to taste at some point during the week.” ENDS CONTACT: Melanie Smith on 01325 363436 Notes to Editors: The Black Sheep Brewery in Masham made its first beer in 1992 after being built up by Paul Theakston, whose family had brewed in the area for six generations. In a world of ever increasing bland, mass-produced beer Paul saw an opportunity to return to what his family had done best since 1827, making real beer in the time-honoured fashion. An old maltings building, once part of Lightfoot's Brewery became the Brewery’s home. This landmark building, which stands high over the banks of the Ure, had fallen in to disrepair as years of neglect as a semi-redundant grainstore had taken its toll. Paul assembled a small team around him to fight the rats and build a traditional country brewery. The Black Sheep Brewery name derived from Masham’s association with sheep, but ‘Sheep Brewery’ didn’t quite sound right, so with a little creativity from Paul’s wife the Black Sheep Brewery was born, a name that sat well with the area, spoke volumes about the maverick attitude to the multi-nationals seeking to dominate the brewing industry and captured the essence of the family struggle that led to our birth. Black Sheep Ale at 4.4% ABV, now in an eco-friendly lightweight bottle, continues to maintain its presence among the top ten premium bottled ale brands, and is available nationwide from virtually all the major supermarket retailers. It is a classic premium bitter and as with all Black Sheep beers, full of character derived from the best possible brewing materials, plenty of time and patience in the brewing and our very special Yorkshire Square fermenters. 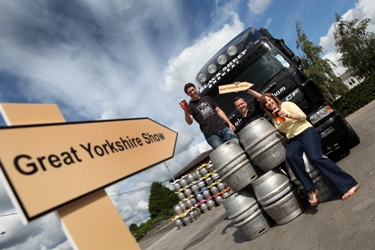