NEWS RELEASE: ISSUED ON BEHALF OF THE BLACK SHEEP BREWERY A team of intrepid cyclists from the Black Sheep Brewery in Masham raised over £600 after completing the 25th North Riding Dales, Licensed Victuallers Association (LVA) bike ride. Black Sheep Brewery employees saddled up to complete the 17-mile cycle route which took them from Hawes to Leyburn, stopping at several hostelries which are members of the LVA on the way. The LVA is a members' organisation who look after the business interests of self-employed licensees in the licensed trade. The association offers advice, help and assistance every day of the year in all areas affecting self employed licensees. Ralph Daykin, President of the North Riding Dales LVA and also landlord of the Victoria Arms in Worton, near Askrigg travels alongside the riders every year in a Land Rover driven by Noel Harris, giving his support. At 86, he is one of the oldest licensee holders in the North of England. The annual bike ride, which is celebrating its silver anniversary, sees members of the Dales LVA enter different teams to take part in the ride. The money raised is shared between several local charities in Wensleydale and Swaledale including the Great North Air Ambulance, Friarage Hospital, Bainbridge Ambulance Station, Yorkshire Air Ambulance and several doctors’ surgeries in the Dales. Since the first bike ride 25 years ago the total raised has reached a staggering £260,000. Jo Theakston, Director of Marketing and Off-Trade Sales, who took part in the bike ride, said “Everyone from the Black Sheep Brewery had an excellent day completing the bike ride. It’s really important to take part in events which highlight the good work and support provided by the LVA to license holders.” “Our team has raised a fantastic amount for the local charities involved and added to the other teams who have also donated, we hope to make a real difference.” Ralph Daykin, said “This year’s Hawes to Leyburn cycle ride was a huge success. The event has been running for 25 years and on behalf of the LVA I would like to thank everyone involved for their support. “I have been involved with the bike ride since day one when there were only a handful of riders, now it attracts over 200, which is a fantastic achievement. I truly value the support and friendships formed through taking part in this event especially the Black Sheep Brewery who sponsor the event, it is fantastic to be associated with a great Yorkshire company.” ENDS CONTACT: Melanie Smith on 01325 363436 Notes to Editors: The Black Sheep Brewery in Masham made its first beer in 1992 after being built up by Paul Theakston, whose family had brewed in the area for six generations. In a world of ever increasing bland, mass-produced beer Paul saw an opportunity to return to what his family had done best since 1827, making real beer in the time-honoured fashion. An old maltings building, once part of Lightfoot's Brewery became the Brewery’s home. This landmark building, which stands high over the banks of the Ure, had fallen in to disrepair as years of neglect as a semi-redundant grainstore had taken its toll. Paul assembled a small team around him to fight the rats and build a traditional country brewery. The Black Sheep Brewery name derived from Masham’s association with sheep, but ‘Sheep Brewery’ didn’t quite sound right, so with a little creativity from Paul’s wife the Black Sheep Brewery was born, a name that sat well with the area, spoke volumes about the maverick attitude to the multi-nationals seeking to dominate the brewing industry and captured the essence of the family struggle that led to our birth. Black Sheep Ale at 4.4% ABV, now in an eco-friendly lightweight bottle, continues to maintain its presence among the top ten premium bottled ale brands, and is available nationwide from virtually all the major supermarket retailers. It is a classic premium bitter and as with all Black Sheep beers, full of character derived from the best possible brewing materials, plenty of time and patience in the brewing and our very special Yorkshire Square fermenters. Twitter: Facebook: Share 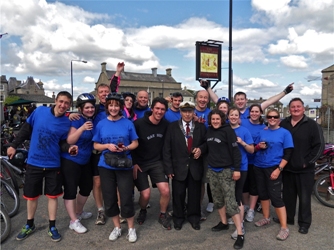