Black Sheep Brewery is celebrating Gold and Silver medals for two of its bottled ales at this year’s World Beer Awards (WBAs).

The prestigious accolades, won despite competition from some of the UK’s leading brewers, affirm Black Sheep’s national and global reputation for excellence.

The Gold for Black Sheep Ale and Silver for Riggwelter, both stalwarts of the North Yorkshire Brewery’s range, were awarded by an expert panel of judges, including journalists, retailers, buyers, brewers and marketers in London.

Black Sheep Ale, a 4.4% ABV beer, received the Gold Medal in the Pale Beer – Amber category of the WBAs. A past winner of the Great Taste Gold Award and bronze medallist in the London 2012 International Beer Challenge, Black Sheep Ale has been part of the flock since 1993 – a year after the brewery was founded in Masham.

Riggwelter, a former bronze medallist at the International Beer Challenge in 2011, received a Silver Medal in the WBA Strong Dark Beer category. At 5.7% ABV, bottled Riggwelter complements the cask version of the beer as Black Sheep’s flagship strong ale.

These successes are not the first time Black Sheep has been successful in the World Beer Awards, with the Brewery’s Yorkshire Square Ale having previously been named World’s Best Premium Bitter in 2009.

Black Sheep Brewery’s Sales and Marketing Director Jo Theakston said: “These World Beer Awards for Black Sheep Ale and Riggwelter are a credit to our brewing team and affirm what we all believe here at the brewery – that Black Sheep’s beers are pretty much unrivalled in their quality and taste. It also helps cement the North Yorkshire region as a hotbed of British brewing.

“Our Head Brewer, Alan Dunn, and his team deserve particular praise. They have been creating top quality brews for over two decades now and it’s the dedication to their art and obsession with quality ingredients that has resulted in this recognition. Everyone at the brewery is very proud we have been honoured with these awards, especially against such esteemed competition. We aren’t resting on our laurels. There’s lots of new quality brews in the pipeline too so watch this space.” 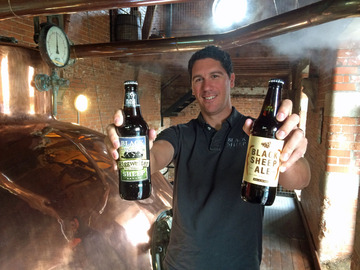