MEDIA INVITATION Media looking for an unique viewpoint of the Tour De France’s Grand Depart and expert commentators on what it means to Yorkshire should look no further than the Black Sheep Brewery. Before, during and after the race, Black Sheep’s team will be on hand to talk about the impact of the event on the community and the economy – and to be your host as the route of the race passes right by its door. For more information, please contact Paul White on 01325 363436. Why base yourself at the Black Sheep Brewery: • As a Yorkshire business, with a Visitor Centre which thrives upon tourism, the Masham-based brewery is at the heart of activities set to attract an estimated 20,000 people to the town on Saturday, July 5. • The Black Sheep Brewery Visitor Centre overlooks the route of the race, with parking for satellite vans, access to supporters enjoying the exciting event and local people to express the importance of the Grand Depart to the area, which is predicted to boost the regional economy by £100m. • Areas of the visitors’ centre can also be reserved for you and your team, and we have great links with other local businesses to help with your stay in the area. • The Visitor Centre is a perfect base from which to experience Le Grand Party, a collaboration of individuals and businesses from around the town, with a host of activities and entertainments being staged in and around Masham, including a “Best of Yorkshire” food and craft fair, children’s activities on the Recreation Ground, a Saturday market and BBQ, plus a range of beer tents. • Be at the heart of history: In an unprecedented move, Black Sheep is joining forces with Theakston’s to set up and stock three bars, selling beers from both dynasties. • The race will be shown on big screens set up for the occasion around the village, as well as inside the Visitor Centre. • With much of the area’s accommodation having been booked up as much as a year in advance, visitors can also take advantage of a special camping site established by Black Sheep Brewery for the occasion. • Black Sheep is also launching a special seasonal beer, Velo, to mark the occasion, a fresh, free-wheeling pale ale, which is also helping to support Yorkshire’s very own Marie Curie Power Peloton rider Mike Hughes. Pre-sales of Velo into pubs across the region already suggest a boost from the excitement surrounding the event. • See the economic impact, first hand: Black Sheep Brewery and its 98 employees will be supplemented by additional staff in roles created by and for the festivities, to ensure a smooth running of the day, with the Visitor Centre open throughout the day, with breakfast served from 9am at its famous Baa..r & Bistro. • The Brewery has a proud history of involvement with cycling events, including the Firkin Challenge (this year, Le Firkin Challenge) and the Licensed Victuallers Association charity ride. Special merchandise, including a best-selling Grand Depart-related t-shirt and cycling clothing, have also been developed. • With tens of thousands of pints expected to be pulled over the course of the weekend, it will provide the perfect opportunity to toast the biggest sporting event to come to Yorkshire. • Black Sheep Brewery will be welcoming locals and visitors alike throughout the day as part of Le Grand Party, and media are welcome to join in and get a real flavour of the Tour De France in Yorkshire. www.blacksheepbrewery.com ENDS Notes to Editors: The Black Sheep Brewery in Masham made its first beer in 1992 after being built up by Paul Theakston, whose family had brewed in the area for six generations. In a world of ever increasing bland, mass-produced beer Paul saw an opportunity to return to what his family had done best since 1827, making real beer in the time-honoured fashion. An old maltings building, once part of Lightfoot's Brewery became the Brewery’s home. This landmark building, which stands high over the banks of the Ure, had fallen in to disrepair as years of neglect as a semi-redundant grainstore had taken its toll. Paul assembled a small team around him to fight the rats and build a traditional country brewery. The Black Sheep Brewery name derived from Masham’s association with sheep, but ‘Sheep Brewery’ didn’t quite sound right, so with a little creativity from Paul’s wife the Black Sheep Brewery was born, a name that sat well with the area, spoke volumes about the maverick attitude to the multi-nationals seeking to dominate the brewing industry and captured the essence of the family struggle that led to our birth. Black Sheep Ale at 4.4% ABV, now in an eco-friendly lightweight bottle, continues to maintain its presence among the top ten premium bottled ale brands, and is available nationwide from virtually all the major supermarket retailers. It is a classic premium bitter and as with all Black Sheep beers, full of character derived from the best possible brewing materials, plenty of time and patience in the brewing and our very special Yorkshire Square fermenters. 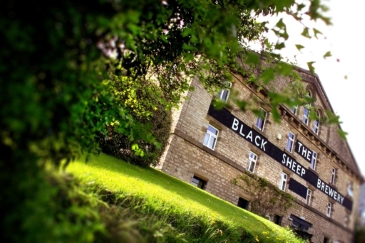