NEWS RELEASE: ISSUED ON BEHALF OF THE BLACK SHEEP BREWERY The Black Sheep Brewery has moved into ‘pastures new’ with its founder Paul Theakston moving to Chairman and eldest son Rob taking on the sole Managing Director role. After nearly 20 years at the Masham-based brewery he founded, Paul has handed day-to-day control to his eldest son, Rob Theakston. With brewing in the blood, Paul is not yet walking into the sunset and will be still intimately involved in the brewery in his role as Chairman. After 6 years of sterling service, outgoing Chairman, Tony Robinson, will remain on the board as a non-exec Director. Father and son have been working as joint Managing Directors for nearly two years to ensure a smooth handover. Rob, 36, joined the family business in 2007 as an Assistant Brewer, after qualifying at Heriot Watt in Edinburgh and gaining a number of years experience of brewing and production at Carlsberg Tetley in Leeds. Paul’s family have been brewing in Masham for six generations, since 1827. The Black Sheep Brewery was built out of Paul’s passion for traditional brewing methods, alongside his love for Masham in North Yorkshire. The Black Sheep Brewery brews around 70,000 barrels each year, and will celebrate its 20th Anniversary in 2012. Paul Theakston, said: “Before my father died in 1968, he explained to me the importance of brewing and the family’s long association with Masham. I became Managing Director of the old family firm T & R Theakston aged 23 as a trained brewer but the company was swallowed up by Scottish & Newcastle in 1988 and it wasn’t the lifestyle for me. I wanted to stay in Masham and loved the small brewery life and so Black Sheep was born. “I have four sons who are all very successful, two of whom have chosen to work alongside me at Black Sheep. As well as Rob, my son Jo is now heading up the Marketing Team and has responsibility for all of the Take Home side of the business. It will be a great experience spending the next chapter working with my sons and a great management team to take the business forward and continue the success we have had until now.” Rob Theakston said: “When my father purchased the site in 1990 I spent all my spare time and holidays helping to build the brewery. I left school and trained in agriculture and animal science but brewing was in my blood and I quickly returned to the trade in 1997. “I returned to Black Sheep in 2007, looking after the Distribution and Technical services teams and have worked alongside my father for the last 18 months to learn from the best in the business. I hope to take the brewery forward with new and innovative ideas, but still keep the traditional values which the business has been built on.” ENDS CONTACT: Melanie Smith on 01325 363436 Notes to Editors: The Black Sheep Brewery in Masham made its first beer in 1992 after being built up by Paul Theakston, whose family had brewed in the area for six generations. In a world of ever increasing bland, mass-produced beer Paul saw an opportunity to return to what his family had done best since 1827, making real beer in the time-honoured fashion. An old maltings building, once part of Lightfoot's Brewery became the Brewery’s home. This landmark building, which stands high over the banks of the Ure, had fallen in to disrepair as years of neglect as a semi-redundant grainstore had taken its toll. Paul assembled a small team around him to fight the rats and build a traditional country brewery. The Black Sheep Brewery name derived from Masham’s association with sheep, but ‘Sheep Brewery’ didn’t quite sound right, so with a little creativity from Paul’s wife the Black Sheep Brewery was born, a name that sat well with the area, spoke volumes about the maverick attitude to the multi-nationals seeking to dominate the brewing industry and captured the essence of the family struggle that led to our birth. Black Sheep Ale at 4.4% ABV, continues to maintain its presence among the top ten premium bottled ale brands, and is available nationwide from virtually all the major supermarket retailers. It is a classic premium bitter and as with all Black Sheep beers, full of character derived from the best possible brewing materials, plenty of time and patience in the brewing and our very special Yorkshire Square fermenters. 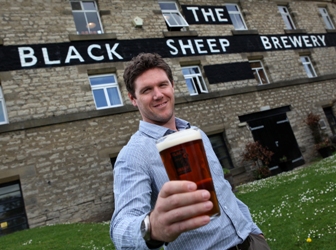