Leading food and drink writers from China enjoyed a taste of Yorkshire during a visit to the Black Sheep Brewery.

The visit came hot on the heels of the Chancellor of the Exchequer, George Osborne’s visit to China to promote the North of England, and will help to raise the profile in the ‘Middle Kingdom’ of the best that Yorkshire and the UK has to offer.

Not only were the journalists given a chance to take a tour the Masham brewery and taste the flock of ales it produces, they were treated to lunch in the Visitor Centre’s bistro, where the menu includes a range of dishes cooked with local produce – and beer!

The visitors were also joined by British food and drink broadcaster and writer Olly Smith.

Rob Theakston, Managing Director of the Black Sheep Brewery, said: “To be selected to host this important delegation of Chinese journalists was a huge honour and a reflection of the high quality of the award-winning ales we produce here at Black Sheep Brewery.

“This visit was a great opportunity to showcase the best of Yorkshire and the UK, because not only did the journalists love our beer, they were treated to some fantastic local produce during their lunch in the bistro.

“There has been a lot of talk of trade with China, thanks to the Chancellor’s visit, and we are proud to be a part of selling the UK to overseas markets.” 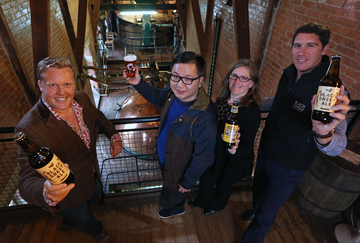