Rudolph may be the most recognisable reindeer, but Black Sheep Brewery is hoping to make a case for ‘Blitzen’, with the return of its Christmas seasonal beer.

Available in cask and 500ml bottles, Blitzen, Black Sheep’s 4.0% ABV ruby ale, is to return to pubs and supermarkets throughout December, drawing to a close the Masham-based brewery’s 2016 seasonal ale calendar.

It is brewed with Cascade and Goldings hops plus light and dark Muscovado sugar to give the beer a distinctive Christmassy richness. Its complex, malty taste is driven by a mix of pale, crystal and pale chocolate malts, with a hint of citrus and mixed peel.

Jo Theakston, Sales and Marketing Director at Black Sheep Brewery, said: “Forget Rudolph, it is all about Blitzen this Christmas! The brewing team have pretty much created ‘Christmas in a glass’ – Yorkshire style - and we think it will be another hit across the region and country this December. Blitzen is a fitting ale to see out 2016 as we all get into the festive spirit.” 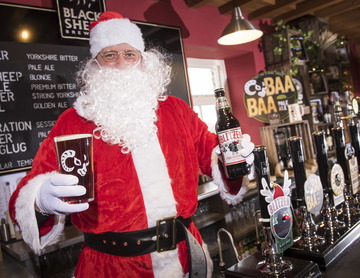