Black Sheep Brewery has announced the return of its popular Christmas seasonal ale to pubs and bars throughout December.

Blitzen, Black Sheep’s ruby ale, which is available on cask, will draw to a close the Masham-based brewery’s 2016 seasonal ale calendar.

At 4.0% ABV, Blitzen is brewed with Cascade and Goldings hops plus light and dark Muscovado sugar to give the beer a distinctive Christmassy richness. Its complex, malty taste is driven by a mix of pale, crystal and pale chocolate malts, with a hint of citrus and mixed peel.

Jo Theakston, Sales and Marketing Director at Black Sheep Brewery, said: “Forget Rudolph, it’s all about Blitzen this Christmas! Our brewing team have pretty much created ‘Christmas in a glass’ – Yorkshire style - and we think it will be another hit among the pub trade across the region and country this December.

“Blitzen is a fitting ale to see out 2016 as we all get into the festive spirit.” 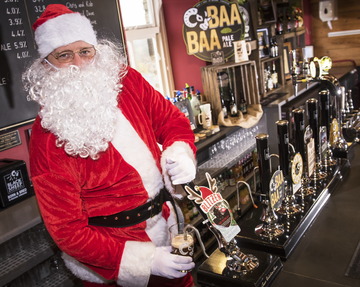