Black Sheep Brewery, one of Yorkshire’s top visitor attractions, is gearing up for Christmas with a number of festive activities for people of all ages.

The Masham-based brewery will be hosting Christmas party nights and festive lunches at its award-winning Visitor Centre in Masham, North Yorkshire, offering customers the perfect way to celebrate the festivities.

Christmas party nights include a three-course dinner and disco at £28.95 per head and are open to groups of any size. Festive lunches are available Mondays to Saturdays in December, with two and three-course options at £15.95 and £18.95 per person.

Blitzen, Black Sheep Brewery’s festive seasonal ale, a 4.0% ABV beer, will be available on cask at the brewery, as well as in the Sheepy Shop and online. This special seasonal beer has been brewed with Cascade and Goldings hops, orange and mixed peel in Black Sheep’s microbrewery. Blitzen has chocolate and spice notes to create a taste and aroma which is distinctively Christmassy.

Over the Christmas period, the Visitor Centre will be closed on Christmas Day and Boxing Day, and will be open until 4pm on New Year’s Eve and will be serving lunch between 12pm and 3pm on New Year’s Day. During opening hours, visitors can also enjoy some Christmas shopping, with food, drink and a whole range of gifts at the Sheepy Shop.

Jo Theakston, Sales and Marketing Director at the Black Sheep Brewery said: “Christmas is the perfect time for all the family and at Black Sheep, as a family-run business, we like to offer something for everyone, especially during the festive season.

“Whether it’s a family meal or a staff party, we have plenty on offer throughout December for everyone, and we are looking forward to helping people celebrate Christmas at Black Sheep Brewery.” 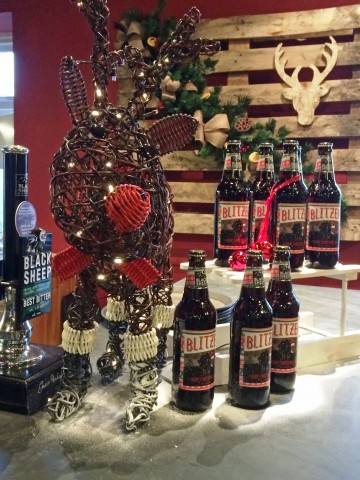