Black Sheep Brewery, one of Yorkshire’s top visitor attractions, is offering its customers the opportunity to enjoy the festive season at its Visitors Centre.

The Masham-based brewery with be open throughout the Christmas period for families to enjoy food at The Bistro, a drink at the Bar, buy gifts in the Sheepy Shop and attend one of the guided tours.

Visitors will be able to sample Black Sheep Brewery’s popular Christmas beer Blitzen at the bar, alongside its wide range of ales, unique lager 54 Degrees North and its first spirit, the Black Sheep Yorkshire Dry Gin.

The Visitors Centre will be open until 6pm on Christmas Eve and re-open on 27th through until January.

The shepherded tours are available each day, taking place at 11am, 12:30pm, 2pm and 3:30pm, with the last tours on Christmas Eve and New Year’s Eve at 2pm.

However, the Visitors Centre will be closed Saturday 4th until Monday 6th January while its team undertake some essential maintenance works, with normal working hours resuming from Tuesday 7th January, 2020.

Jo Theakston, Sales and Marketing Director at the Black Sheep Brewery said: “Christmas is the perfect time for all the family and at Black Sheep, as a family-run business, we like to offer something for everyone.

“Whether it’s a family meal, a beer with friends or last minute presents, we have plenty on offer for everyone and look forward to welcoming visitors throughout the festive season.

“I would also like to take this opportunity to wish a Merry Christmas and a Happy New Year to all our customers, suppliers and friends!” 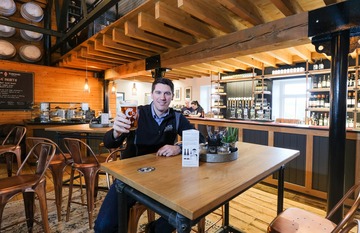