Lovers of cricket and beer raised a toast to an ongoing partnership between two Yorkshire icons at a special evening with Jason “Dizzy” Gillespie.

Black Sheep Brewery has entered its third year of sponsorship of Yorkshire County Cricket Club and the relationship was marked with the fan event featuring the County’s coach.

Dubbed “An Evening With Dizzy”, the event featured a packed house at East of Arcadia, in Meanwood, Leeds, with the 39-year-old former Australia international facing questions from supporters.

Black Sheep’s Master Brewer, Phil Douglas, was also on hand to give an insight into brewing, and the processes and ingredients involved in top selling beers, including Black Sheep Best Bitter and the current seasonal ale, Velo.

Yorkshire County Cricket Club coach Jason Gillespie said: “Facing questions from the public can be every bit as nerve-wracking as facing a top fast bowler, but we had a great time at East of Arcadia and having Master Brewer Phil on hand with some great beers was an added bonus.”

Rob Theakston, Managing Director of Black Sheep Brewery, said: “This was a great event, featuring a true cricket legend on the global stage, and a man who is becoming increasingly synonymous with the sport in Yorkshire. We love our cricket at Black Sheep, and the partnership with Yorkshire County Cricket Club is an excellent relationship which celebrates Yorkshire and the things which make it great.”

Rhian Aitken, manager of East of Arcadia, which is run by Market Town Taverns, said: “What a great night we had with Jason Gillespie and Black Sheep. Our regulars and new customers alike had a great time hearing about two of their favourite subjects – cricket and beer – from two of the best known names in their field.” 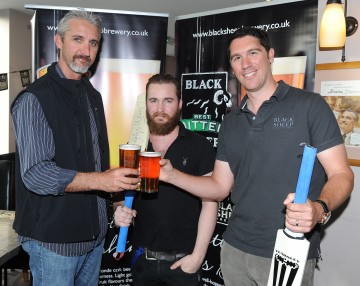