Rugby stars joined staff from Black Sheep Brewery and guests from the Yorkshire and North East pub industry to celebrate the Rugby World Cup and a special ale brewed to mark the tournament.

Guests, including locals and landlords from across the pub trade, relived England’s glorious 2003 World Cup Final victory, as it was played out on screens in Black Sheep’s Visitor Centre in Masham.

Blind Side, which has been created at the North Yorkshire brewery, has been created with an all-English pack of eight hops varieties and will be available in pubs throughout the tournament, in September and October.

The 4.3% ruby cask ale is the latest in a string of hugely popular brand new beers to be developed in the microbrewery plant, which allows for greater experimentation and creativity from the multi-award-winning Black Sheep brewing team.

Jo Theakston, Sales and Marketing Director at Black Sheep Brewery, said: “It’s a once in a generation event having the Rugby World Cup on our shores, and with a number of ex rugby players among the Black Sheep team, we were keen to mark the occasion with a new rugby themed brew.

“It was fantastic that so many guests, including Dean and Dave, joined us for the evening to launch Blind Side and to relive the moment Jonny Wilkinson’s drop goal secured the trophy for England in 2003. Blind Side is another fantastic creation from our award-winning brewing team, which we are hugely proud of – it certainly helped to make the event a huge success.”

Speaking about Blind Side and England’s chances in the Rugby World Cup, Dean Richards commented: “Blind Side’s very nice, slightly different to the normal Black Sheep beer, and is a very good pint. For England, if everything falls for them, they can win the World Cup and we wish them all the best.”

Dave Walder added: “I’m very impressed with Blind Side and it’s a great initiative with the Rugby World Cup coming up to launch a beer with a rugby theme.” 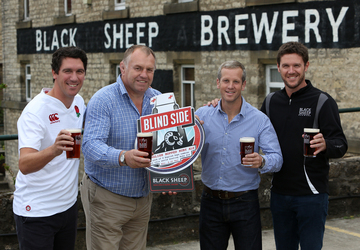