Black Sheep Brewery is bringing Christmas cheer with the return of its popular festive ale, Blitzen, as it looks once more to its seasonal range in the battle to “sleigh” bland beers.

Blitzen, a quaffable ruby ale created in Black Sheep’s microbrewery, made its debut on cask and in bottles at Christmas 2014 and is returning to pubs throughout December 2015. The cask ale will be available in pubs with a fantastic new pump clip, sporting a bell, felt hat and even a flashing nose.

Blitzen, a 4.0% ABV beer, is brewed with Cascade and Goldings hops plus light and dark Muscovado sugar to give the beer a distinctive Christmassy richness. Its complex, malty taste is driven by a mix of pale, crystal and pale chocolate malts, with a hint of citrus and mixed peel. As well as the cask ale, Blitzen is also available in bottles.

Black Sheep’s seasonal ale range is created in the microbrewery in the award winning brewery and visitor centre in Masham, Yorkshire.

Rob Theakston, Black Sheep Brewery’s Managing Director, said: “Blitzen was really well received by pubs and punters last year and the pre-orders from customers already have been fantastic! We are excited about bringing it back for another season because it’s a top quality pint and a real ‘taste of Christmas.’ With its new all singing and all dancing pump clip, we hope pubs will use Blitzen to get into the full swing of Christmas.

“Our microbrewery has given us a wonderful opportunity to innovate with quality new brews, and, as a result, our seasonal beer calendar has gone from strength to strength over the past two years, with fantastic beers coming out, such as Blitzen.” 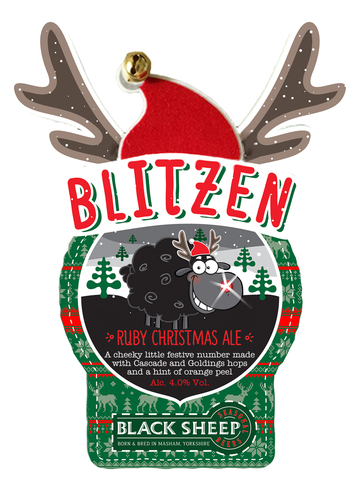