King's Head returns with support from a Yorkshire icon

New owners Nick and Karen Glanvill have carried out an extensive refurbishment on the King’s Head, in Gunnerside, Swaledale.

As well as re-roofing, refurnishing the pub, and carrying out repairs to the building’s structure, Nick and Karen have worked with the Black Sheep team to put the Masham-based brewery’s Best Bitter, Riggwelter and Golden Sheep on the newly-installed bar.

The King’s Head, which dates from 1760 closed two years ago and Nick and Karen, who also own Keld Lodge, near Richmond, bought the premises in July this year.

All of the refurbishment work on the Grade II listed building has been conducted in line with planning permission granted by the Yorkshire Dales National park Authority.

Nick Glanvill said: “It is truly satisfying to see a building that needed so much work, once again open and serving its locals and visitors to the Dales. In rural communities such as Gunnerside, the pub is at the heart of the village life and is an essential amenity. We filled five skips with years of accumulated rubbish and spent hours and a small fortune giving The Kings Head  a great new look  and we are delighted to have Black Sheep, a Yorkshire icon, at the heart of the brand new bar.

“We are pleased to be opening the doors once more and welcoming customers back into the King’s Head.”

David Croft, Senior Business Development Manager at Black Sheep Brewery, said: “Pubs like the King’s Head are priceless, so it is very exciting to see Nick and Karen’s investment paying off for the community of Gunnerside. It’s great that they have chosen Black Sheep to anchor the pub’s cask ale offerings, keeping Yorkshire at the heart of the new look King’s Head.” 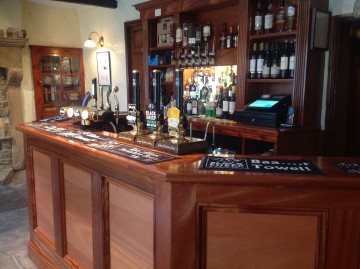