NEWS RELEASE: ISSUED ON BEHALF OF THE BLACK SHEEP BREWERY The Savile Arms in Thornhill near Dewsbury has received an official blessing from a Canon of Ripon Cathedral after its new Black Sheep brewery branded signs were hung outside the venue. Part of the 245 year-old building is settled on consecrated ground, which belongs to St Michael and All Angels Church located adjacent to the pub. The pub was blessed 15 years ago when the former signs were hung over the door. Canon Brian Abell, former vicar of Masham, who performed that original ceremony, returned to carry out a traditional blessing at the pub which David and Hilary Oldfield run. The Savile Arms is the first pub run by David and Hilary. David previously worked in the pub trade but became landlord of the Savile Arms 11 years ago. New signs were created for the pub by its main supplier, Black Sheep Brewery and have again been officially blessed and hung over the door of the venue. David Oldfield said: “Having our signs blessed is a lovely tradition and we are very pleased to have Paul Theakston and Canon Abell visit the pub again. Our most popular beer on draft is Black Sheep Best Bitter, which we serve alongside their other permanent and seasonal cask ales. “The original building is almost 400 years old and part of it resides on the cemetery which belongs to the church next door. We therefore feel its appropriate to have our new signs properly blessed, as a mark of respect for the holy land.” David Croft, Area Sales Manager for the Black Sheep Brewery, said: “Black Sheep have been successfully supplying the Savile Arms with Best Bitter for about 20 years now and it’s a pleasure to attend the official blessing of the new signs incorporating our logo.” Canon Brian Abell said: “I am proud to be able to bless the new signs for this social hub. It’s important to respect the holy ground underneath the building so it’s good that David and Hilary feel the same. It has been a long-lived tradition that this building receives a blessing so it’s an honour to keep it alive.” ENDS CONTACT: Paul White on 01325 363436 Picture caption: Canon Brian Abell blesses the Savile Arms, watched by management and staff from the pub and Black Sheep Brewery Chairman Paul Theakston (holding bowl). Notes to Editors: Please note the Black Sheep Brewery has a new logo, if high res version is needed please download from: http://www.recognitionpr.co.uk/journalistarea-story.asp?id=11216 The Black Sheep Brewery in Masham made its first beer in 1992 after being built up by Paul Theakston, whose family had brewed in the area for six generations. In a world of ever increasing bland, mass-produced beer Paul saw an opportunity to return to what his family had done best since 1827, making real beer in the time-honoured fashion. An old maltings building, once part of Lightfoot's Brewery became the Brewery’s home. This landmark building, which stands high over the banks of the Ure, had fallen in to disrepair as years of neglect as a semi-redundant grainstore had taken its toll. Paul assembled a small team around him to fight the rats and build a traditional country brewery. The Black Sheep Brewery name derived from Masham’s association with sheep, but ‘Sheep Brewery’ didn’t quite sound right, so with a little creativity from Paul’s wife the Black Sheep Brewery was born, a name that sat well with the area, spoke volumes about the maverick attitude to the multi-nationals seeking to dominate the brewing industry and captured the essence of the family struggle that led to our birth. Black Sheep Ale at 4.4% ABV, now in an eco-friendly lightweight bottle, continues to maintain its presence among the top ten premium bottled ale brands, and is available nationwide from virtually all the major supermarket retailers. It is a classic premium bitter and as with all Black Sheep beers, full of character derived from the best possible brewing materials, plenty of time and patience in the brewing and our very special Yorkshire Square fermenters. Tweet Share 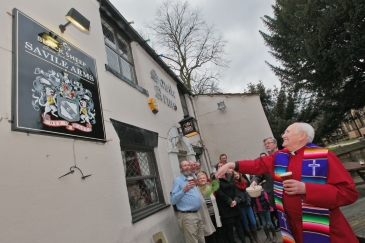