Black Sheep Brewery experienced its most successful November for online sales, which have seen a 542% increase on the same month in 2019.

With England in another national lockdown during November with pubs, bars and restaurants closed, customers have turned to online ordering to get their taste of Yorkshire from the Masham-based brewery.

Culminating in Black Friday and Cyber Monday, Black Sheep Brewery received 3,176 orders in November, up from 494 orders a year before.

The Black Sheep ecommerce team with support from colleagues from across the brewery worked together to meet demand from customers for products ranging from bottled beers, mini-kegs, gift packs, hampers and its beer advent calendar.

The popularity of Black Sheep’s collection of beers, as well as its Yorkshire lager, 54, and the recently launched Black Sheep Gin coupled with its gift range has continued into December as the brewery manages increased order levels in the run up to Christmas. Black Sheep Brewery will continue to dispatch pre-Christmas orders up until 18th December.

Alongside its e-commerce activity, Black Sheep Brewery has also continued to offer alternative ways to enjoy its products, including its highly popular ‘Brew to Ewe’ local beer delivery service for customers across large parts of North and West Yorkshire.

Charlene Lyons, Chief Executive of Black Sheep Brewery, said: “The combination of the second national lockdown and the run up to Christmas has again revealed people’s passion for Black Sheep and their determination to enjoy our taste of Yorkshire. Our team have really pulled together to handle this huge influx of orders as we have pivoted the brewery’s operations towards our online business while pubs, bars and restaurants have been forced to close.

“The hospitality sector has been disproportionately affected by the government’s coronavirus restrictions, and we have shown true Yorkshire grit to react to the situation by being agile and reacting quickly. We are really grateful that the public have continued to support us with high levels of online orders, which are continuing in the last couple of weeks before Christmas. Thank you!” 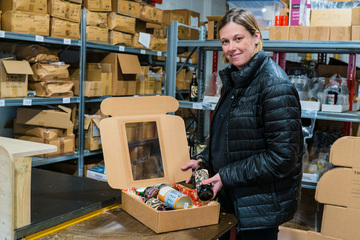