Black Sheep Brewery has paid tribute to the sheep farming heritage of its home town, Masham, as part of its silver anniversary celebrations, with the return of Shearer to pubs in June.

It marks the first time Shearer, a juicy, lemongrass pale ale, has been available to the pub trade since 2015, which forms part of the brewery’s 2017 seasonal ale schedule.

Masham’s sheep farming heritage was a key factor in the naming of Black Sheep Brewery, which celebrates its 25th anniversary this year, with up to 70,000 sheep sold in the North Yorkshire town each year. It also plays host to the popular Masham Sheep Fair.

At 4.1% ABV, Shearer is a full-bodied and zesty sharp, straw-coloured ale, brewed with citra hops and a hint of lemongrass.

It will feature a commemorative 25th anniversary pump clip while it is available in pubs.

Jo Theakston, Sales and Marketing Director at Black Sheep Brewery, said: “Masham is a very special place and means a great deal to everyone associated with Black Sheep, so it is fitting that we recognise the town’s prestige as part of our 25th anniversary celebrations. Shearer will be a welcome addition to pubs and bars throughout the North, especially towns and villages renowned for their farming heritage.

“We are delighted to bring back Shearer in June, which coincides perfectly with the start of summer, and its zesty taste will make it a refreshing drink for afternoons and evenings in the beer garden!” 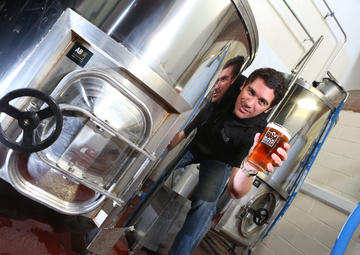