Black Sheep Brewery and comedy legends Monty Python have teamed up to create a Christmas beer of biblical proportions that will have pub customers looking on the bright side of life!

The film follows the exploits of Brian, a man born on the same day as Jesus – even getting a visit from the Three Wise Men – and goes on to be mistaken for the Messiah!

The name ‘Brian’ was decided after a vote among Monty Python’s 1.2m followers on Facebook. The Pythons then added ‘A Christmas Beer They Call…’ and ‘A Very Naughty Pale Ale’ because, as Michael Palin said, “I’d quite like to see ‘naughty’ on a beer bottle.” It will be available in pubs throughout December with a pump clip featuring the Python style artwork and the iconic ‘Brian’ logo.

The new beer marks the second collaboration between Black Sheep Brewery and the official Monty Python team. Created in homage to the first Python film, the Monty Python’s Holy Grail ale has become one of the Masham-based brewery’s most popular beers and in now a permanent part of its cask and bottled range.

Jo Theakston, Sales and Marketing Director at Black Sheep Brewery, said: “’Life of Brian’ is one of the most iconic British comedy films of all time and the perfect inspiration for a festive Monty Python beer. The Pythons have been involved throughout the development of our new beer – I’m sure their fans and drinkers alike will agree it’s a quality brew!

“Our other Python-themed beer, Holy Grail, has become incredibly popular and helps kicks off pub banter among those who love to recite classic lines from the film. Brian very much follows in that tradition and might even help inspire some renditions of ‘Always Look on the Bright Side of Life’ in pubs throughout the Christmas period.

“We are always looking to offer our customers creative and exciting brews and, together with the support and backing of Monty Python, we are expecting very ‘naughty’ things with the creation of Brian!” 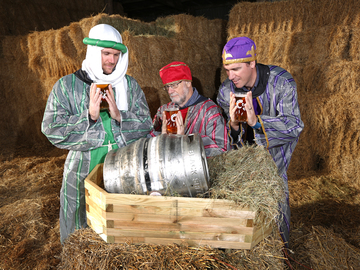