Black Sheep Brewery has announced a significant 6-month listing with Morrisons that will see its best-selling cask beer available on supermarket shelves for the first time.

The North Yorkshire-based brewery has secured the deal with the Big Four supermarket, following the launch of its Black Sheep Best Bitter in 5-litre mini keg format.

Black Sheep Best Bitter was previously only available to the on-trade as a cask and keg brand, and is Yorkshire’s best-selling cask beer.

The launch comes in Black Sheep Brewery’s 25th anniversary year, which has already seen the rollout of its craft beer range, consisting of Pathmaker and Glug M’Glug, in 330ml can format, which are also available in supermarkets.

Jo Theakston, Sales and Marketing Director at Black Sheep Brewery, said: “This is another Black Sheep exclusive and we are delighted to offer Yorkshire’s best-selling cask ale outside of pubs for the very first time. It is an exciting period and only fitting that we extend one of our most well-known brands so people can enjoy our Best Bitter in the comfort of their home, in our landmark 25th anniversary year.”

John Morris, Morrisons Beer Buyer, said: “We’re always looking for ways to improve and update our range and are excited to see what our customers think of Black Sheep’s mini kegs and our new keg range."

Black Sheep Brewery was founded by Paul Theakston in 1992. 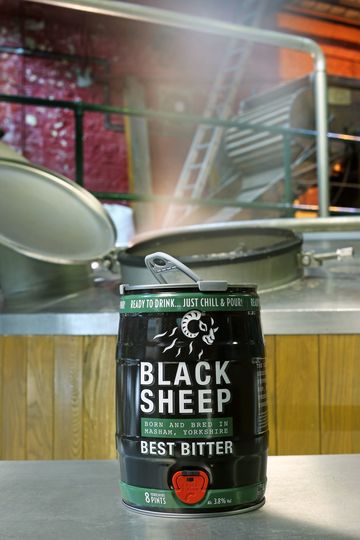