My Generation Beer 'all the rage' for Mod Radio with partnership

The My Generation Beer Co. has joined forces with a popular internet radio station to strengthen its ties with all lovers of beer and music, as well as the ‘mod’ scene.

My Generation Beer Co. was formed in 2015 and brews its beer in collaboration with Black Sheep Brewery.

Its signature beer, My Generation, a 4.2% session pale ale, is brewed in Masham and distributed through Black Sheep. A light straw colour, My Generation is brewed from an exciting blend of new world hops including Cascade, Galena, Magnum and Polaris.

Mod Radio, which was formed in 2015, is the brainchild of professional DJ Mark Ambrose and is devoted to playing the best Mod, Northern Soul, Motown, Mod Revival, Ska and Two Tone hits, as well as helping to promote upcoming mod bands.

Jonny Kirkham, of the My Generation Beer Co., said: “I launched My Generation because I play the guitar and love music and beer. To work with Mod Radio is an exciting next step in the life of My Generation. We’re really happy to partner with Mod Radio, which shares our same values and our desire to bring together good beer and good music.”

Mark Ambrose added: “I launched the station to channel my passion for the mod scene and to help showcase aspiring mod musicians and bands. My Generation represents exactly what Mod Radio is all about and I am excited by this partnership, as well as grateful for its support.” 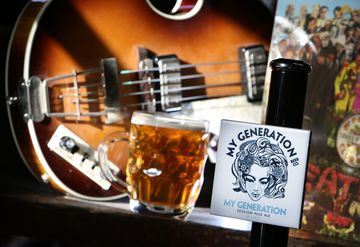