Brewing industry experts are uniting to form an ale “super group” that celebrates and brings together the joint passions of people with a love of beer and music. The My Generation Beer Company is a brand new “label” aimed at what it sees as an as-yet untapped audience of drinkers.

The venture is a collaboration between the Black Sheep Brewery, led by brothers Rob and Jo Theakston, and industry marketing specialist Jonny Kirkham. Renowned beer lyricist Pete Brown is the trio’s “support act”, as content contributor to the company’s digital platforms.

My Generation is the signature brew and will be the official beer of Record Store Day 2015, which takes place in April and is a nationwide celebration of vinyl records. A three month seasonal listing has been agreed with Mitchells & Butlers’ collection of Castle and Nicholson’s pubs from March, while there will also be a selective on-trade distribution.

Jonny Kirkham said: “There’s a love of music in everyone and the My Generation Beer Company represents something brand new in the beer industry, bringing together quality ale and real music. We have seen bands put their names to drinks in the past, but that targets a narrow and specific fanbase audience. We aim to unite beer fans with music you’d expect to hear more on BBC 6 Music.

Rob Theakston said: “The three of us all share a love of music and passion for beer and we are excited to bring something new to the market like this. We are convinced there is a great crowd out there to embrace a brand like this from pubs to festivals, as well as overseas. It’s an exciting new venture which will sit separately to the core Black Sheep business but our ability to distribute through the Black Sheep Brewery network is as good as any record deal going.” 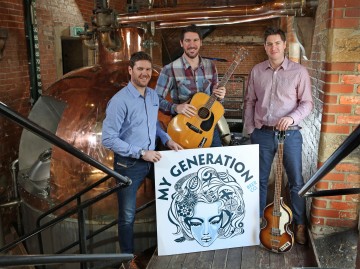