Black Sheep Brewery’s 54° North is continuing to take a prominent position in the growing UK lager market, with the launch of a stylish dispensing font that will be on display in pubs and bars across the country.

Originally launched in 2017 as the North Yorkshire brewery’s first ever lager, the premium quality, Helles-style lager has quickly established itself in pub and retail markets.

Having recently secured listings for 54° North with major supermarket chains Tesco and Morrisons, the lager will also be an important addition to UK pubs during the summer months with the new font increasing visibility at the bar.

54° North, a 4.5% ABV premium small batch craft lager, was created in homage to Black Sheep’s hometown of Masham and the brand’s name derives from the line of latitude around the earth that passes through the Yorkshire market town – 54th parallel North.

Brewed with German Pilsner Malt, together with Magnum and Polaris hops, as well as the classic German aroma hop, Tettnang, 54° North is top fermented using Black Sheep’s famous Yorkshire Square fermenters in Masham, then lagered for a month to intensify the crisp, clean finish.

The successful development and establishment of 54° North demonstrates the brewing diversity at Black Sheep, which was recognised by the British Beer & Pub Association (BBPA) at its awards last year when the brewery was named Beer Champion 2017.

Rob Theakston, Managing Director at Black Sheep Brewery, said: “We are really pleased with the reaction to 54° North and this new dispensing font will make it stand out further in what is a growing and competitive lager market. We do believe that combining our brewing heritage and expertise has enabled us to successfully enter the lager market with a premium choice that is increasing the diversity of Black Sheep brews in UK pubs.” 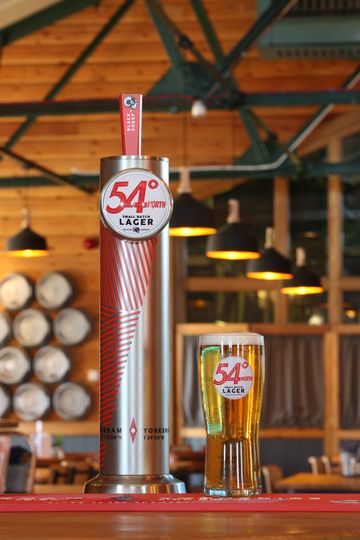