NEWS RELEASE: ISSUED ON BEHALF OF THE BLACK SHEEP BREWERY A thriving real ale pub in the village of Pool in Wharfdale has been the first pub to hang up new Black Sheep Brewery signage, which is incorporating the Brewery's newly refreshed brewery logo The Hunters Inn, a family run pub near to the market town of Otley, will be the first Black Sheep Brewery affiliated pub to have the new-look style displayed on its signage. The sign coincides with the announcement of the new licensee for The Hunters Inn, Graham Yellow. Graham took over the pub earlier this year, after a family tragedy made him re-evaluate what was important in his life, leading him to search for opportunities to become his own boss. Graham will be running the pub alongside his wife, Barbara, who currently works in finance, but helps with the running of the pub after work and during the weekend. The pub, which truly is family run, also sees Graham’s children helping out. 18 year-old Alex runs the bar, 23 year-old Samantha works part time in the bar and looks after the accounts and 24 year-old Nicholas is head chef, creating traditional home cooked meals, sourced from local produce. After various tranches of market research, Graham decided that real ale would be the main selling point of the pub and chose to link up with Black Sheep Brewery, which brews its ales in a traditional way and are also a proud family run business. Paul Theakston set up the brewery in 1992, his two sons are involved in the running of the business with his eldest, Rob Theakston as Joint Managing Director and Jo Theakston as Marketing and Off-Trade Sales Director. The Hunters Inn now has eleven real ale pumps, stocking all four of Black Sheep Brewery cask ales. Graham Yellow, licensee of The Hunters Inn said: “After deciding that real ale was the product we felt would support our vision in our new business, it was only natural to look for an established brand such as Black Sheep. I found doing business with another family business has really assisted us to positively promote and build on our business.” Jo Theakston, Marketing and Off-Trade Sales Director for Black Sheep Brewery said: “We are all very excited at the brewery to roll out the refreshed logo and it seemed fitting to have the first exterior signage displayed at The Hunters Inn as it highlights its new licensee and the pub incorporates the family run and traditional business values which are also held in high regard at the Black Sheep brewery.” David Croft, Black Sheep Account Manager, said: “It’s fantastic to see the new-look signage up and displayed outside The Hunters Inn. The pub is a genuine, traditional venue with a great atmosphere and we are delighted they have chosen Black Sheep as its main supplier.” ENDS CONTACT: Melanie Smith on 01325 363436 Notes to Editors: The Black Sheep Brewery in Masham made its first beer in 1992 after being built up by Paul Theakston, whose family had brewed in the area for six generations. In a world of ever increasing bland, mass-produced beer Paul saw an opportunity to return to what his family had done best since 1827, making real beer in the time-honoured fashion. An old maltings building, once part of Lightfoot's Brewery became the Brewery’s home. This landmark building, which stands high over the banks of the Ure, had fallen in to disrepair as years of neglect as a semi-redundant grainstore had taken its toll. Paul assembled a small team around him to fight the rats and build a traditional country brewery. The Black Sheep Brewery name derived from Masham’s association with sheep, but ‘Sheep Brewery’ didn’t quite sound right, so with a little creativity from Paul’s wife the Black Sheep Brewery was born, a name that sat well with the area, spoke volumes about the maverick attitude to the multi-nationals seeking to dominate the brewing industry and captured the essence of the family struggle that led to our birth. Black Sheep Ale at 4.4% ABV, now in an eco-friendly lightweight bottle, continues to maintain its presence among the top ten premium bottled ale brands, and is available nationwide from virtually all the major supermarket retailers. It is a classic premium bitter and as with all Black Sheep beers, full of character derived from the best possible brewing materials, plenty of time and patience in the brewing and our very special Yorkshire Square fermenters. Twitter: Facebook: Share 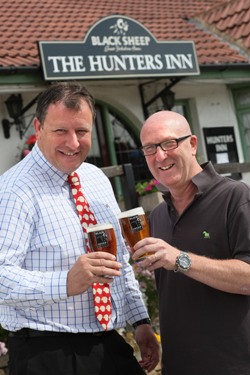