NEWS RELEASE: ISSUED ON BEHALF OF THE BLACK SHEEP BREWERY PRESTIGIOUS CASK MARQUE AWARD FOR BAA..RILLIANT PREMIER EVENTS Premier Event Bars is the first mobile bar company in the country to be accredited with a Cask Marque award, sponsored by the Black Sheep Brewery. The North’s leading mobile bar company, owned by Mark and Sharon Hopkins from Harrogate, offers a range of mobile facilities including mobile units and marquee counter bars to cater for any event. Mark and Sharon have been in the pub and drinks industry for 28 years offering their expertise across a full bar service including cask ales, draught beer, lager, cider, Guinness, wines, spirits and soft drinks. The Cask Marque award is given to establishments that can guarantee the drinker a great pint of cask beer. Once accredited, the venue can display the ‘Cask Marque’ sign outside to highlight the high quality standard of cask beer supplied and the fully trained staff serving it. Each year Cask Marque, which is an independent non-profit organisation, visits 18, 000 British pubs and bars to ensure the quality within the establishment is of the highest standard. Premier Event Bars were presented with the award by Jo Theakston, Director of Marketing and Off Trade Sales and David Croft, Sales Manager for North Yorkshire both of Black Sheep brewery and were assessed by Britain’s only female cask beer inspector, industry renowned Annabel Smith, at The Knaresborough Bed Race. Jo Theakston, Director of Marketing and Off Trade Sales said, “We have worked with Mark and Sharon over a number of years through festivals and events. They are extremely professional in the way they conduct their business and are experts in the drinks field. “The Black Sheep Brewery is proud to be sponsors of the Cask Marque award presented to Premier Event Bars; they deserve to be officially recognised for the quality cask ale they provide and the expert service of their staff.” Mark Hopkins, joint owner of Premier Event Bars said, “Black Sheep has supported us from the beginning, we serve all four cask beers including, Black Sheep Best Bitter and Riggwelter.” Sharon Hopkins, joint owner of Premier Event Bars said, “We hope to grow as an events business and having the Cask Marque award will demonstrate the high and professional standard of our mobile facilities and pint-pulling skills.” Paul Nunny, Director of Cask Marque said, “Being able to serve cask beer at outside functions pleases many cask ale drinkers. However, this takes a considerable amount of skill and investment to ensure that the beer is of the highest quality standard and skill in terms of cellar practices and investment in cooling equipment. Premier Event Bars have demonstrated their commitment and justifiably deserve the Cask Marque award.” ENDS CONTACT: Melanie Smith on 01325 363436 Notes to Editors: The Black Sheep Brewery in Masham made its first beer in 1992 after being built up by Paul Theakston, whose family had brewed in the area for six generations. In a world of ever increasing bland, mass-produced beer Paul saw an opportunity to return to what his family had done best since 1827, making real beer in the time-honoured fashion. An old maltings building, once part of Lightfoot's Brewery became the Brewery’s home. This landmark building, which stands high over the banks of the Ure, had fallen in to disrepair as years of neglect as a semi-redundant grainstore had taken its toll. Paul assembled a small team around him to fight the rats and build a traditional country brewery. The Black Sheep Brewery name derived from Masham’s association with sheep, but ‘Sheep Brewery’ didn’t quite sound right, so with a little creativity from Paul’s wife the Black Sheep Brewery was born, a name that sat well with the area, spoke volumes about the maverick attitude to the multi-nationals seeking to dominate the brewing industry and captured the essence of the family struggle that led to our birth. Black Sheep Ale at 4.4% ABV, now in an eco-friendly lightweight bottle, continues to maintain its presence among the top ten premium bottled ale brands, and is available nationwide from virtually all the major supermarket retailers. It is a classic premium bitter and as with all Black Sheep beers, full of character derived from the best possible brewing materials, plenty of time and patience in the brewing and our very special Yorkshire Square fermenters. Twitter: Facebook: Share 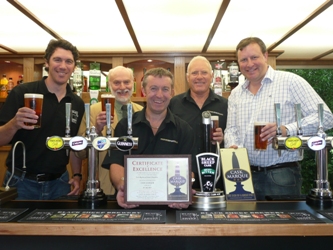