Pub customers will be able to complete their quest to find Black Sheep Brewery’s Holy Grail when its Monty Python-themed seasonal golden ale returns as a cask beer in March.

Originally created to commemorate 30 years of English comedy legends Monty Python, Holy Grail has gone on, over the past 15 years, to become a cornerstone of Black Sheep’s bottled beer collection and its return to the pumps is always highly-anticipated.

The beer enjoyed a particular resurgence during the 2015 national tour of Monty Python’s Holy Grail-themed musical Spamalot and continues to be one of Black Sheep’s most requested seasonal cask ales.

Officially endorsed by the comedy troupe, Monty Python’s Holy Grail is a light golden 4.0% ABV beer with a fresh, zesty taste and a long crisp bitter finish. It is brewed with Maris Otter malt and a mixture of hops including WGV to give a light fruity nose. It is also, most notably, as the pump clip suggests, ‘tempered over burning witches.’

Pubs will be able to showcase Holy Grail at the bar throughout March using the new Monty Python-themed pump clip, which features John Cleese, Michael Palin and the rest of the group in their medieval costumes worn in the 1975 film of the same name.

Jo Theakston, Sales and Marketing Director at Black Sheep Brewery, said: “Monty Python is at the heart of English culture, which is reflected by the appetite for our Holy Grail beer. It continues to be a popular member of our bottled range, but there is always an extra buzz when it appears in pubs as a cask beer.

“As well as being a welcome addition to pubs’ line-up of beers in March, Holy Grail also helps spark plenty of Monty Python-inspired barroom debate over the best sketches and lines from the TV shows and films. There are so many classics catchphrases and the debate raged long into the night over which Holy Grail line we’d include on the pump clip.

“We’ve gone for the brilliantly-British ‘Your Mother was a Hamster and Your Father Smelt of Elderberries’, but there are hundreds from the Python TV and film back catalogue.

“We’re also taking the debate to Twitter encouraging people to tweet their most loved Python quote to @BlackSheepBeer and, perhaps, we’ll find the nation’s favourite.” 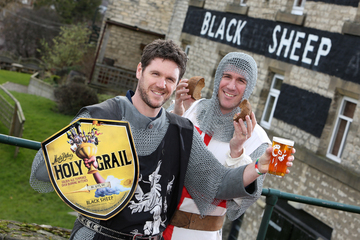