Black Sheep Brewery has revealed a refreshed identity for one of its award-winning signature ales, ahead of its 25th anniversary year in 2017.

Riggwelter, the Masham-based brewery’s award-winning strong, dark ale, has been given a fresh new-look. The name Riggwelter is derived from a local Yorkshire Dales dialect word for when a sheep rolls onto it’s back and can’t get back up – they say it is ‘rigged’ or ‘riggwelted’.

Riggwelter is available on both cask and 500ml bottle (5.7% abv) and has recently being winning a string of prestigious awards. It was most notably recognised on an international and national scale for its taste after being awarded a Gold Medal at the 2016 International Beer Challenge and was named the United Kingdom’s Best Strong Dark Beer at this year’s World Beer Awards. High praise!

Jo Theakston, Sales and Marketing Director at Black Sheep Brewery said: “Riggwelter has established itself as one of our flagship ales and a popular choice for customers both young and old. We are seeing something of a resurgence in the popularity of big flavoured dark Ales and Riggwelter is one of the best there is!

“We have been sympathetic to the original bottle design and have refreshed it for a modern audience with a much cleaner and bolder standout of our ‘riggwelted’ sheep. We are hoping to build on the strong growth that the brand has enjoyed, and this should certainly help support that trend and also introduce the beer to new drinkers. 2017 is a landmark year for Black Sheep, in what will be our 25th anniversary, so we are preparing for an exciting year ahead that will feature many of our tried and trusted classics as well as some new creative, seasonal ales.”

Jo added: “Our great brewing team have continued to do a magnificent job by continually producing award-winning brews day in, day out, and the recent award successes are testament to that.” 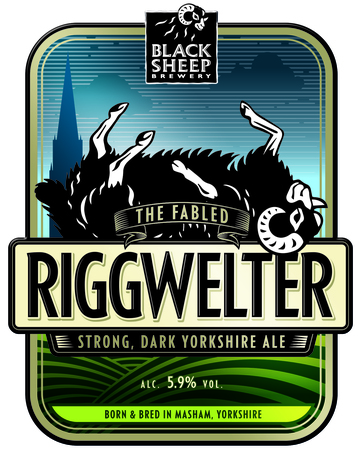