Black Sheep Brewery is looking forward to the 2020 Six Nations with the return of its rugby inspired beer, Ram Tackle.

With a history of producing rugby themed beers to coincide with major tournaments, Ram Tackle has become a firm favourite of pubgoers and is making a welcome return for the 2020 tournament which kicks off on 1st February.

Brewed at the brewery’s home in Masham, North Yorkshire and available exclusively in cask throughout February, drinkers will be able to ruck-over to the bar for a pint of Ram Tackle, a 4.1% ABV ruby ale, brewed with a scrum of eight different English hops.

The hop blend offers rich and fruity characters throughout whilst a complex malt base adds a defiant and charismatic layer to the robust ale.

Jo Theakston, Innovation and Export Director at Black Sheep Brewery, said: “After the success of the World Cup there was no doubt we would bring back our fans’ favourite Ram Tackle so home nation supporters can toast their teams during the 2020 Six Nations.

“Being huge rugby fans here at Black Sheep, we’ll be raising a pint of our full-bodied Ram Tackle in the hope that the momentum England achieved by reaching the World Cup Final can be continued by bagging a Grand Slam at this year’s tournament!”

In the recent years, Black Sheep has won a number of prestigious awards, including: 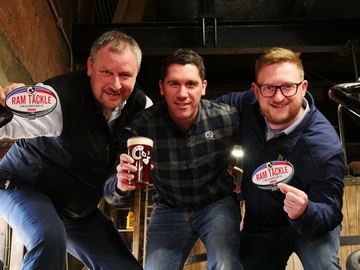