Black Sheep Brewery is tapping into US Presidential election fever with the return of its bold, Anglo-American IPA, Big Horn, for a ‘second term’ in pubs this September.

As Democrats and Republicans line up their candidates stateside, pub customers will be able to make Big Horn their choice for the first time since 2014.

Big Horn was one of Black Sheep’s first seasonal brews to be developed in its microbrewery and its success led to it being scaled up and transferred to the brewery’s main brewhouse for full UK distribution, when it was originally launched two years ago.

With an ABV of 4.5%, Big Horn is a full-flavoured Anglo-American IPA, brewed with a heady mix of English Challenger and American Summit hops.

Big Horn takes its name from a breed of sheep found in the Rocky Mountains, in America, so called because of its long horns.

Jo Theakston, Sales and Marketing Director at Black Sheep Brewery said: “We are delighted to be offering Big Horn to the pub trade once again, following its successful launch two years ago. It was one of our first seasonal beers to be brewed in our microbrewery and one that we are very proud of, so much so that it was scaled up for full UK-wide distribution.

“Election fever is heating up in the States and the eyes of the world are on the Presidential race, so it is a timely release of Big Horn, which can be enjoyed by all – whether you are a Trump or Clinton supporter!” 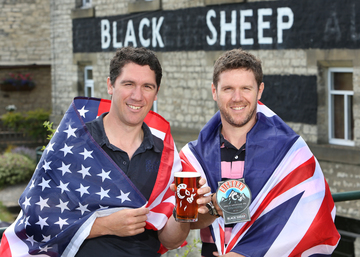