NEWS RELEASE: ISSUED ON BEHALF OF THE BLACK SHEEP BREWERY SPAMALOT AUDIENCES DRINK THE BAR DRY OF BLACK SHEEP’S HOLY GRAIL 23/01/13 A Yorkshire beer inspired by Monty Python’s classic Holy Grail film has become a West End smash after fans of the cult TV comedy troupe drank the bar dry at performances of the hit show Spamalot. Famed to be found at the end of epic quests by King Arthur and his knights and even author Dan Brown’s intrepid hero Robert Langdon, the Holy Grail has always been a much-sought after prize. However, Black Sheep Brewery bosses and management at the Playhouse Theatre were taken aback by the popularity of the Yorkshire brew, which was put on sale especially for Spamalot’s residency at the venue. In the first two weeks alone, Python fans wiped out the theatre’s supply of the bottled beer, which is produced by Black Sheep in Masham. Now, Brewery bosses have had to rush emergency shipments to the theatre, in London’s Northumberland Street, to keep the bar stocked. Spamalot runs at the Playhouse Theatre until April. Paul Theakston, Chairman of the Black Sheep Brewery said: “For Holy Grail to have been so enthusiastically embraced by the Spamalot audience is wonderful. Spamalot and Holy Grail are a perfect combination for comedy and beer fans and we are looking forward to keeping supplies coming throughout the show’s residency at the Playhouse Theatre. Hopefully, our Holy Grail will prove easier to get its hands on during the run, as we work with the theatre’s management to keep them fully stocked with this Black Sheep favourite.” Dean Stewart, Manager at Playhouse Theatre, said: “Bottles of Black Sheep Holy Grail have been flying from the bar! We decided to stock the iconic beer because of its links with Monty Python and it seems theatre goers have really embraced it. Thanks to the extra deliveries we are now fully stocked, ensuring customers can enjoy a bottle during future performances of Spamalot.” For more information on the brewery please see: www.blacksheepbrewery.com Monty Python fans wanting to get their hands on Holy Grail can visit the Black Sheep Brewery shop online at www.blacksheepbrewery.com/shop/. ENDS CONTACT: Melanie Smith or Paul White on 01325 363436 Notes to Editors: The Black Sheep Brewery in Masham made its first beer in 1992 after being built up by Paul Theakston, whose family had brewed in the area for six generations. In a world of ever increasing bland, mass-produced beer Paul saw an opportunity to return to what his family had done best since 1827, making real beer in the time-honoured fashion. An old maltings building, once part of Lightfoot's Brewery became the Brewery’s home. This landmark building, which stands high over the banks of the Ure, had fallen in to disrepair as years of neglect as a semi-redundant grainstore had taken its toll. Paul assembled a small team around him to fight the rats and build a traditional country brewery. The Black Sheep Brewery name derived from Masham’s association with sheep, but ‘Sheep Brewery’ didn’t quite sound right, so with a little creativity from Paul’s wife the Black Sheep Brewery was born, a name that sat well with the area, spoke volumes about the maverick attitude to the multi-nationals seeking to dominate the brewing industry and captured the essence of the family struggle that led to our birth. Black Sheep Ale at 4.4% ABV, now in an eco-friendly lightweight bottle, continues to maintain its presence among the top ten premium bottled ale brands, and is available nationwide from virtually all the major supermarket retailers. It is a classic premium bitter and as with all Black Sheep beers, full of character derived from the best possible brewing materials, plenty of time and patience in the brewing and our very special Yorkshire Square fermenters. Tweet Share 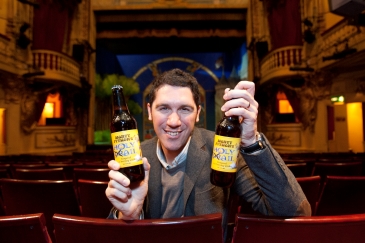