Famously “tempered over burning witches”, Holy Grail was originally created to commemorate the 30th anniversary of Monty Python, and is a much-loved part of Black Sheep’s bottled beer collection. Some 15 years on, Black Sheep has created a new pump clip design with the beer having been given a new lease of life with the recent reunion and the subsequent Spamalot tour currently racing round the UK.

Monty Python’s Holy Grail is a light golden beer with a fresh, zesty taste and a long crisp bitter finish. It is brewed with a mixture of hops, including Maris Otter and WGV, to give a light fruity nose.

Jo Theakston, Sales and Marketing Director at Black Sheep Brewery, said: It was very special to see the reunion of the surviving Monty Python team last year and it proved what we have always known, that there is still a fantastic appetite for Python among British beer drinkers.

“Great British beer and humour work well together, and we witnessed this first hand with the bottled version of Holy Grail flying out of the Playhouse Theatre, in London’s West End, during the run of Spamalot.

“Putting Holy Grail out on cask this April is something we are very excited about because it represents something different for pubs. And to make the casks…you must now cut down the tallest tree in the forest…with…a herring!” 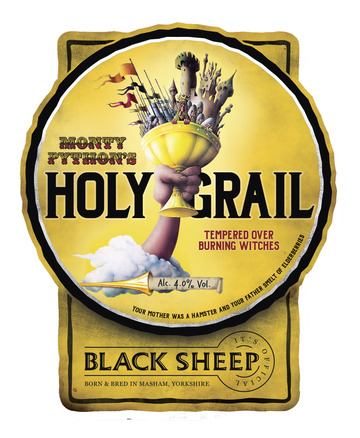