Black Sheep Brewery is preparing for one of its leading ales to brandish a fresh new look as it takes pride of place on shelves across the off-trade.

Golden Sheep, which has been part of the Black Sheep flock since 2009, is the Brewery’s leading brand in the golden ale market.

The move comes off the back of a successful rebrand of the brewery’s leading bottled beer, Black Sheep Ale last year. Golden Sheep Ale will sport a bright, fresh and more modern new look which aims to entice new drinkers. The new labels will appear in stores from November.

The move aims to firmly position Golden Sheep for growth as one of Black Sheep’s leading bottled ales and continues the Brewery’s drive to ensure its high-quality beer range remains relevant to new and loyal ale drinkers.

Jo Theakston, Sales and Marketing Director of Black Sheep Brewery, said: “The re-branding of Golden Sheep comes as we look to create a ‘family feel’ to our bottled beer range. The bold re-brand of Black Sheep Ale last year helped push sales forward and we are hoping Golden Sheep Ale will experience a similar surge. The new branding stands out really well on supermarket shelves and we hope to pull in more new drinkers to this quality drop as a result of taking this step.

“There is strong growth in the golden ales market, which is proving a strong entry point for drinkers getting into ales for the first time, and Golden Sheep Ale is a perfect place to start!.” 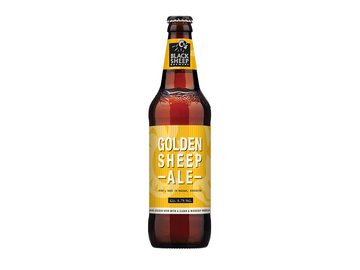