Black Sheep Brewery is to give drinkers a sense of ‘threedom’ in the beer garden this summer with its latest seasonal cask ale launch.

The Masham, North Yorkshire-based brewery has created Threedom, a fruity, three-hopped pale ale that will be available in pubs and bars across the UK until the end of August.

It follows Square 1 in Black Sheep’s 2018 seasonal ale calendar – a beer named in homage to its hometown of Masham and the town’s market square – the largest one in Yorkshire.

Jo Theakston, Sales and Marketing Director at Black Sheep Brewery, said: “Threedom will be a refreshing option for drinkers in the beer garden during this unusually prolonged period of warm British weather. By combining Citra, Galena and Summit hops, Threedom delivers a fruity aroma with a crisp finish that will make it an ideal choice at the bar for the remainder of the summer.”

Jo added: “Our brewing team have continued to produce creative beers fit for any season, which have been deservedly recognised across the beer and pub trade. Threedom is an exciting brew and will make for a welcome addition to our seasonal ale calendar.” 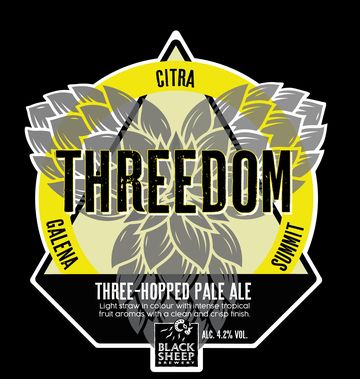