A brewing “super group”, the My Generation Beer Company, is cranking up the volume to amplify the joint passions of music and beer.

The new “label” is a collaboration between the Black Sheep Brewery, led by brothers Rob and Jo Theakston, and industry specialist Jonny Kirkham. Renowned beer lyricist Pete Brown is the trio’s “support act”, as content contributor to the company’s digital platforms.

My Generation, the company’s signature brew, will be the debut release, available in cask format and hitting pubs as the official beer of April’s Record Store Day 2015.

My Generation, which will initially be brewed as a cask ale, in Masham, North Yorkshire, and distributed through Black Sheep Brewery. A 4.2% light straw coloured session pale ale, My Generation Pale Ale is brewed from an exciting blend of new world hops including Cascade, Galena, Magnum and Polaris, which gives a big, fresh aroma and a cracking bitter finish.

Jo Theakston added: “2015 will see My Generation reach out through pubs, festivals and other music happenings and celebrate creative culture. 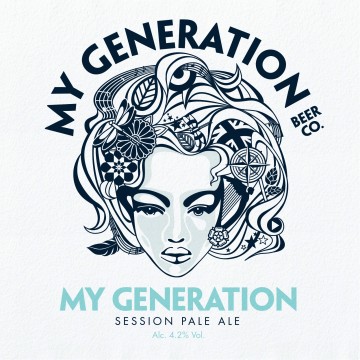