Black Sheep Brewery is moving through the gears with its anniversary year celebrations with the return of its best-selling seasonal ale in time for the Tour de Yorkshire.

Velo, Black Sheep’s ‘freewheeling’ pale ale, will return to pubs and bars across the UK in April, ahead of the race, which starts on Friday 28th April and will pass through Masham, where Black Sheep is based, on Saturday 29th April.

Velo, at 4.2% ABV, was last seen in pubs in July 2016, coinciding with the Tour de France, and is Black Sheep’s second seasonal release of 2017, in what is its 25th anniversary year.

It is brewed with cascade hops and a subtle hint of orange and coriander.

Velo was first introduced ahead of Le Grand Depart Yorkshire in 2014, and was initially created in Black Sheep’s microbrewery before being scaled up to full production.

Black Sheep co-hosted a celebration on the day of Le Grand Depart where more than 20,000 visitors descended on Masham to catch a glimpse of the Tour de France riders pass through the town.

Jo Theakston, Sales and Marketing Director at Black Sheep Brewery, said: “It is rewarding to see how much Velo’s popularity has grown over the years, and it is only fitting that we bring it back to recognise Yorkshire’s significant role in British cycling.

“Since Le Grand Depart, and the significant role Black Sheep played in celebrating the momentous occasion throughout Masham and the county, cycling has benefited in the UK and we are delighted to join in the festivities surrounding Tour de Yorkshire.

“We are expecting Velo to ride on again to further success and its presence will provide the perfect opportunity for customers to bask in the spring sunshine over a pint of our freewheeling pale ale!” 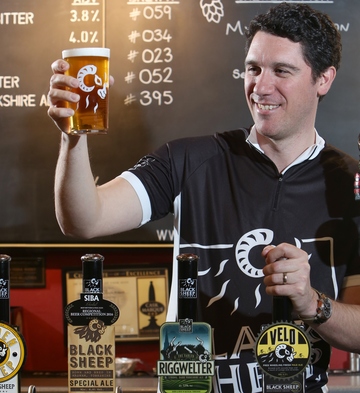