As the riders pedalled for the finish line at the Tour de France, Black Sheep Brewery beat the clock on its own very special challenge – to get the first bottles of its newest beer to the Champs Elysees in time for the race finale.

Black Sheep decided to make Velo – French for bicycle – a permanent bottled beer following public demand on the day that the race’s competitors passed by the brewery during Le Grand Depart on July 5.

And in true race spirit, the challenge was set to complete the process in time to get bottles to Paris for when the riders crossed the finish line – only three weeks later. The brewing, label design and printing, bottling and label application was completed in record time – faster than the riders’ own journey from Yorkshire to Paris.

Velo has already sold double the amount of Black Sheep’s previous best selling seasonal ale, being stocked in pubs up and down the country, as well as on special bars in Masham for Le Grand Depart.

The beer is a 4.2% ABV ‘freewheeling’ fresh pale ale brewed with cascade hops and a subtle hint of orange and coriander, developed and tested in Black Sheep’s microbrewery, then scaled up in the brewery’s full plant, initially to be sold only in casks.

Jo Theakston, Black Sheep Brewery’s Sales and Marketing Director, said: “Our bottled version of Velo is officially faster than the riders on the Tour de France, as we made the decision after they had passed the brewery on July 5th and delivered the first bottles to the Champs Elysees before they crossed the finish line. It was a fitting challenge to set ourselves, as Velo is inspired by the sport of cycling and by the arrival of the race in Yorkshire.

“The Tour de France has been fantastic for the area and its spirit will live on in Velo as a permanent bottled beer in our collection.” 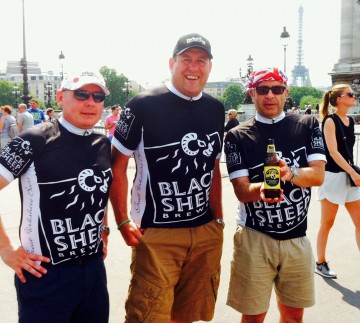 left to right: Black Sheep’s Steve Raper, Giles Christie and Mike Hilyer at the Champs Elysees with one of the first bottles of Velo
Download Large Image
Latest Tweets from @Recognition1st :