NEWS RELEASE: ISSUED ON BEHALF OF THE BLACK SHEEP BREWERY The Shoulder of Mutton pub in Mytholmroyd, near Hebden Bridge, has officially re-opened its doors to customers after it was devastated by flooding caused by one of the wettest summers the UK has ever seen. The Black Sheep beer stockists have put the finishing touches to the exterior of the pub and restaurant by hanging up its new sign. After intense rainfall in June, the pub was left completely ruined when the Elphin stream, which runs along the bottom of the pub’s garden, burst its banks, completely flooding the ground floor. Six months later and after a complete refurbishment, including new flooring, seats, tables and bar, the Shoulder of Mutton is now able to open its doors to its customers. The only salvageable features from the previous pub, which have remained, are the wooden doors. In the village of Mytholmroyd, almost 50% of businesses were severely affected by the worst flooding recorded since 1952. Lynn Hartley, co-owner of the Shoulder of Mutton, said: “We are thrilled to be finally open again for business. It seems like we’ve been waiting for a long time to announce that we are officially open, but it has been worth it. The new fixtures and fittings look fantastic and you would never have known there was around 3ft of water gushing through the property. “I want to thank people in the village that came to our rescue on the day after we were evacuated. Family, friends and even strangers rallied around to help us bucket out water from the premises.” David Croft, Account Manager at the Black Sheep Brewery said: “We are really pleased that the Shoulder of Mutton Inn has been able to reopen to its customers. They are a prominent customer of Black Sheep and we are happy to be supporting the pub as it re-opens to serve its community.” ENDS CONTACT: Melanie Smith on 01325 363436 Notes to Editors: Please note the Black Sheep Brewery has a new logo, if high res version is needed please download from: http://www.recognitionpr.co.uk/journalistarea-story.asp?id=11216 The Black Sheep Brewery in Masham made its first beer in 1992 after being built up by Paul Theakston, whose family had brewed in the area for six generations. In a world of ever increasing bland, mass-produced beer Paul saw an opportunity to return to what his family had done best since 1827, making real beer in the time-honoured fashion. An old maltings building, once part of Lightfoot's Brewery became the Brewery’s home. This landmark building, which stands high over the banks of the Ure, had fallen in to disrepair as years of neglect as a semi-redundant grainstore had taken its toll. Paul assembled a small team around him to fight the rats and build a traditional country brewery. The Black Sheep Brewery name derived from Masham’s association with sheep, but ‘Sheep Brewery’ didn’t quite sound right, so with a little creativity from Paul’s wife the Black Sheep Brewery was born, a name that sat well with the area, spoke volumes about the maverick attitude to the multi-nationals seeking to dominate the brewing industry and captured the essence of the family struggle that led to our birth. Black Sheep Ale at 4.4% ABV, now in an eco-friendly lightweight bottle, continues to maintain its presence among the top ten premium bottled ale brands, and is available nationwide from virtually all the major supermarket retailers. It is a classic premium bitter and as with all Black Sheep beers, full of character derived from the best possible brewing materials, plenty of time and patience in the brewing and our very special Yorkshire Square fermenters. Twitter: Tweet Facebook: Share 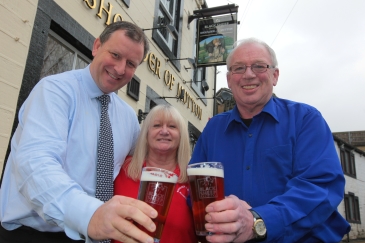