Black Sheep Brewery is bringing Velo, its most popular seasonal ale ever, back to the pumps of pubs up and down the country.

The move coincides with the Tour de Yorkshire cycling race, which follows the successful visit of the Tour de France to the region last year, inspiring the original launch of Velo.

Velo returns to pumps throughout May and June. The Tour de Yorkshire takes place from May 1 to May 3, over three stages; Bridlington to Scarborough, Selby to

A 4.2% ABV ‘freewheeling’ fresh pale ale brewed with cascade hops and a subtle hint of orange and coriander, Velo is a beer which has made a successful transition from development and testing in Black Sheep’s microbrewery, having been scaled up in the brewery’s full plant.

Jo Theakston, Black Sheep Brewery’s Sales and Marketing Director, said: “Cyclists have always loved the beauty of Yorkshire, and this passion has grown significantly on the back of the Tour de France Grand Depart coming to the region last year, making

“When we developed Velo, drinkers in bars in the region and up and down the country confirmed our own belief in its great taste, making this light, refreshing ale the best selling seasonal ale in the history of Black Sheep Brewery.” 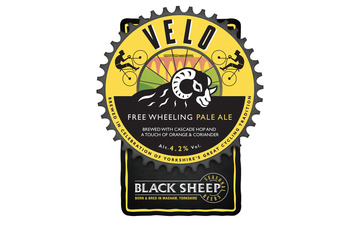