York Brewery has unveiled a new look for its flagship beer, Guzzler, strengthening its pride and association with the historic city of York.

With people returning to pubs following the lifting of pandemic lockdown restrictions, York Brewery have created a new look for the 3.6% ABV Guzzler to attract customers, which features one of York’s most iconic landmarks.

Its pump clip, and subsequently the labels on the 500ml bottles later this year, will display an image of Micklegate Bar, the historic gates to the city of York, alongside patterned textures inspired by the Viking movement, which is synonymous with the history of the city.

Masham-based Black Sheep Brewery acquired York Brewery in December 2018, including its brands and four of its outlets, rescuing the business from administration and saving its famous beers including Guzzler.

Guzzler is currently brewed in Masham while Black Sheep continues its strategy to source suitable premises in York to return production to within the city walls.

Rob Theakston, Managing Director of Black Sheep Brewery, said: “We’re keen to build on the legacy of York Brewery and the popularity of Guzzler with a new look that shows off its proud association with our world-famous city!

“Black Sheep is exceptionally proud to be the custodians of York Brewery’s popular range of beers and its reputation for hand crafted ales that are enjoyed both in York and far beyond the city walls.

“We are keen to return the brewing of Guzzler and its sister beers to York when we find a suitable location. In the meantime, we will continue to share our love of the city through the unique beers and their iconic York-inspired branding.” 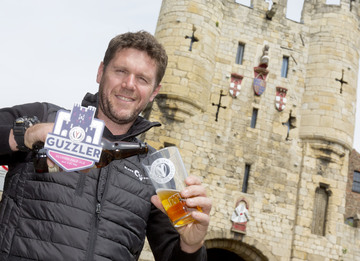