An intrepid father and son have tackled Mount Everest with the backing of a famous Yorkshire brewery.

David and Chris Bradley, from Thirsk, embarked on a 29,000ft ‘Bradventure’, which lasted 8 weeks, with Black Sheep Brewery covering the cost of their high altitude clothing.

Chris, who now works for the Forestry Commission in Aviemore, Scotland, is a long-time friend of Alex Theakston, youngest son of Black Sheep Brewery founder Paul Theakston, and got in touch with managing director Rob Theakston, who supported the challenge.

Starting the expedition from Kathmandu, the pair flew to Lukla alongside Tim Mosedale, a mountain guide based in Keswick, and then travelled together along the trail through the Khumbu Valley, passing many settlements, and climbing over high passes to reach the Khumbu Glacier and finally, Everest base camp.

Unfortunately, David was evacuated from base camp soon after arriving with a suspected pulmonary embolism, which is a blockage of the artery in the lungs, so was brought back down to Kathmandu where he spent a week in hospital before flying home to the UK, while Chris eventually went on to move up the mountain and successfully summit Mount Everest.

David, a semi-retired chartered accountant, started mountaineering eight years ago when Chris persuaded him to climb Mont Blanc, and he has since conquered Denali, the highest mountain in North America, and Island Peak in the Himalayas, alongside lots of Scottish Winter climbing.

It was David’s third attempt of climbing Everest, with previous trips being abandoned due to tragedy amongst a group Sherpas following an avalanche in the icefall, and the Nepalese earthquake which brought devastation to the country as a whole in 2015.

Chris said: “I am delighted to have reached the summit of Mount Everest. It has always been a dream of mine to stand up there and experience some of the history which makes Everest such a special place. It was a fantastic experience but a massive challenge that was extremely difficult at times due to the weather conditions, especially on the night we summited which was unusually cold and windy.

“I feel very lucky to have had this opportunity and feel very grateful to the team of Sherpas we climbed alongside; their strength and support gave our team the chance to succeed. I would have loved to have celebrated at the summit with my Dad, but I am just thankful that he is now recovered and back to full strength and that we were able to share some of the this experience together.”

He added: “Black Sheep Brewery is a fantastic, family-run business and I know it very well, so it was great to have the support of Rob, Jo and the team as our challenge was a family affair too. I am grateful for Black Sheep’s support throughout, which equipped Dad and I well for the expedition and allowed me to accomplish my goal.”

Jo Theakston, Sales and Marketing Director at Black Sheep Brewery, said: “David and Chris’ challenge was a true reflection on what it is to be a Black Sheep! They are both daring individuals who tackled something that was out of the ordinary and outside of their comfort zones. Black Sheep Brewery was built on these very same values, so we were delighted to help out David and Chris with their challenge.

“It was a shame that David was unable to reach the summit, but Chris well and truly flew the Bradley flag at the end. We are really proud of both of them. I would like to congratulate the pair on their fantastic achievement and wish David all the best in his recovery.” 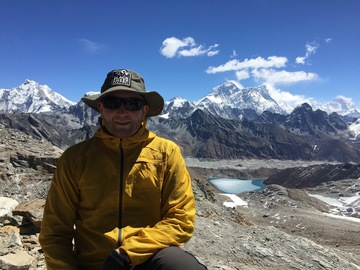